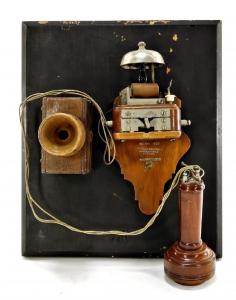 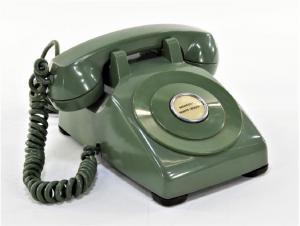 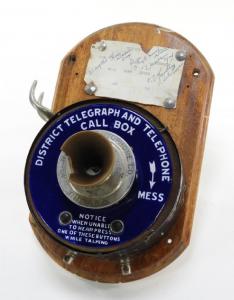 The first phone/emergency call box ever installed in the Yukon Territory in Canada, circa 1900 ($2,500). 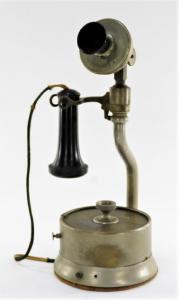 Featured were items from two chapters of the Telephone Pioneers of America Museum (Providence, R.I., and Buffalo, N.Y.). The auction was held in Cranston, R.I.

It was a thrill and a half to hammer down the Thomas A. Watson prototype and Butter Stamp magneto telephone. It was the best learning experience I could ask for and it was a great sale.”
— Travis Landry

The auction was held online and in Bruneau & Co.’s gallery at 63 Fourth Avenue. Featured were items from two regional chapters of the Telephone Pioneers of America Museum: the William J. Denver chapter #20 museum in Providence, R.I., and the Excelsior Chapter #98 in Buffalo. N.Y. A live-only pre-sale event at 10 am Eastern was followed by the main cataloged auction at 11.

The metal-and-wood Bell and Watson prototype phone was accompanied by original 1881 patent paperwork and a tag with Watson’s hand-written name and the date August 2, 1881. The Bell Butter Stamp magneto phone was mounted to an easel board and had the original museum label, stating it had been installed “many years ago in the Malvina K. Wetmore residence” in Newport.

The auction presented an exciting and rare collection of historical telephones, photographs, maps, cables, prototypes, ephemera and more, ranging from the first phone/emergency call box ever installed in the Yukon in Canada to the telephone from President Dwight Eisenhower’s Newport, Rhode Island summer White House. In all, over 500 lots crossed the auction block.

“It was a thrill and a half to hammer down the Thomas A. Watson prototype and Butter Stamp magneto telephone,” said Travis Landry, a Bruneau & Co. specialist and auctioneer. “I really don’t know if and when I will be able to handle such exciting yet historical items again, but I know I’ll be ready. It was the best learning experience I could ask for and it was a great sale.”

Bruneau & Co. company president and auctioneer Kevin Bruneau added, “It was pretty neat to hold a telephone that was held by a president before I was even born, or to hold a plank from Alexander Graham Bell’s laboratory. If things like that don’t send chills up your spine nothing will. I am excited to learn more as we work together with the Telephone Pioneers of America.”

The Eisenhower phone he referred to was marked behind the cradle “Bell System” and “Made by Western Electric”. It was used at the Newport home formerly known as the “Commandant’s Residence and Quarters Number One”. An original museum label identified the telephone as “President Eisenhower’s Personal Telephone at the Summer White House”. It went for $1,375.

Following are additional highlights from the auction. Internet bidding was facilitated by bidLIVE.Bruneauandco.com, LiveAuctioneers.com, Invaluable.com and Bidsquare.com. Phone and absentee bids were also accepted. All prices quoted here include the buyer’s premium.

The first phone/emergency call box ever installed at Dawson, Canada, in the Yukon Territory, at the time of the Gold Rush around the turn of the century, had a tag that said: “Combination Telephone and Fire Alarm Box”. Made by National Telephone Company (Chicago), the phone was removed from its pole at 5th and Church streets in Dawson in August 1960. It made $2,500.

A 1984 Summer Olympic Games (Los Angeles) relay torch, one of only 4,500 made, carried prior to the Games by John Cox of the Pioneers, Hamburg-Olean Council, with a photo of Cox carrying the torch and an Olympic committee booklet, went to a determined bidder for $2,125.

A mid-20th century Western Electric experimental side hanger phone breezed to $1,500. In the mid-1960s, Providence, R.I., was selected by Bell Laboratories for a product trial of a newly designed telephone set. The result was this model, which was sent back to the lab for redesign.

Bruneau & Co. Auctioneers has several auctions planned for August and September. Live-only auctions will be held on Saturday, August 18th, on-site in Tiverton, R.I., and on Monday, August 27th, at the Cranston gallery (a discovery auction). A single-owner train auction will be held live and online on Saturday, September 1st; and an estate antiques and fine art auction will be held on Saturday, September 22nd, both in the Cranston gallery. Watch the Bruneau website for details.
To learn more about Bruneau & Co. Auctioneers and the firm’s calendar of upcoming auctions, visit www.bruneauandco.com. To contact the company via e-mail, use info@bruneauandco.com.