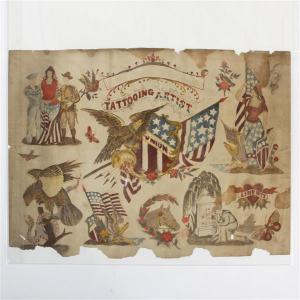 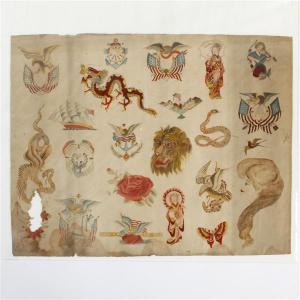 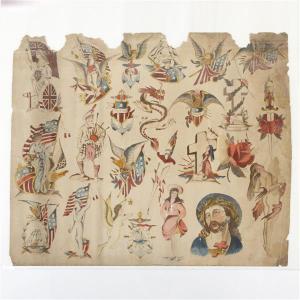 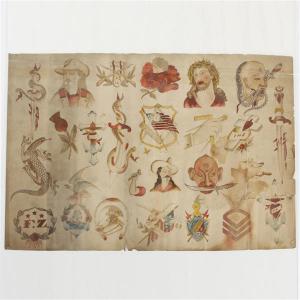 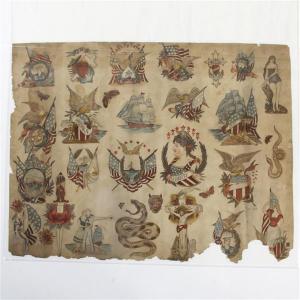 The six sheets were found in the bottom of a trunk in the attic of an 84-year-old career Marine Corps officer. The trunk had been in storage for over 40 years. It also held other rare items, including a 1584 hand-colored map engraving of Tuscany, Italy, which was also in the auction.

Tony Gallick, an antique collector, spotted the trunk at a recent estate sale. He said, “While the man was overseas in the 1940’s, his wife kept busy by shopping yard and estate sales. The house was covered floor-to-ceiling with boxes. They moved often as he was reassigned. She bought the trunk and it stayed in storage for decades. I saw it, thought it was pretty cool and paid $10 for it.”

When Gallick first laid eyes on the flash sheets, he knew they were rare and important. “I didn’t know the artist, but I knew they were highly collectible,” he said. “I did research for about two months. The 1908 date on one design was my starting point. There were only a handful of tattoo artists at the turn of the century. The flash of ships and sailors lead me to research port cities.”

That brought Gallick to New York and the Bowery, then to Charlie Wagner and Sam O’Reilly. “They were working together for a decade until Sam’s death in 1909,” Gallick pointed out. “When Sam died in 1908, Charlie moved into his shop and their work was blended together.”

Sam O'Reilly (1854-1909) learned tattooing in the Navy and patented the first tattooing machine in 1891. He practiced his art in New York City, in the Bowery. Charlie Wagner (1875-1953) was a tattoo artist for more than 50 years. He apprenticed with O'Reilly and patented his own tattoo machine in 1904. He sold tattoo machines and his own brand of ink. He also tattooed circus performers, sailors and "tattooed ladies” who became famous as circus side-show attractions.

Gallick spoke to flash experts who noted several aspects of the sheets that pointed to Wagner and O’Reilly. The paper was the right size and material. Charlie was one of the only artists of the day to use brown ink, not black. The vibrantly colored tattoos were representative of his work.

The subject matter dated as far back as 1894 and included “Buffalo Bill” Cody, Gen. George Armstrong Custer, the Spanish-American War and the image of crossed guns, representative of Teddy Roosevelt’s Rough Riders, to name a few. One of the images included the date of 1908.

Gallick discovered an image of Jesus on one flash sheet that can be seen in a common photo of a boy that Charlie Wagner tattooed over many years, beginning when the boy was just nine years of age. “He brought him into the parlor located in the back of a barber shop and gave him free tattoos,” Gallick shared. “This young kid was an orphan, and in 1906 he got a full body tattoo.”

Gallick added, “Charlie talked him into being the first electronically tattooed boy in America and helped him get a job in the circus. On his chest was a tattoo of Jesus, which can be seen on the flash sheet. Also, Charlie was one of the only artists tattooing children with images of sailors.”

Ripley Auctions offers services for estates and collections to an international audience. It has state-of-the-art global marketplace for arts, antiques, jewelry and memorabilia. Ripley Auctions is always accepting quality consignments for future auctions. To inquire about consigning an item, an estate or an entire collection, call (317) 251-5635 or email Sales@RipleyAuctions.com.