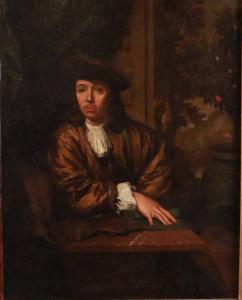 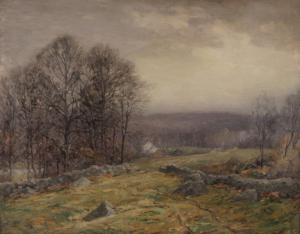 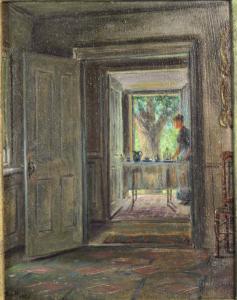 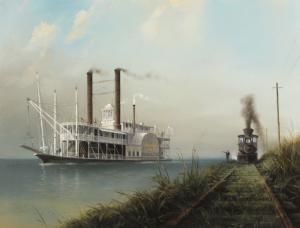 Include are a spectacular offering of Self-Taught and Outsider Art from the Namits Collection and an equally exciting group of works from the Westervelt Corp.

Whether you like Dutch Old Masters or contemporary works by artists like Robert Motherwell and Helen Frankenthaler, this sale has something to suit your every taste.”
— Andrew Holter

BLOOMFIELD, NJ, UNITED STATES, August 30, 2018 /EINPresswire.com/ — BLOOMFIELD, N.J. – A diverse selection of artworks that span from the 17th century through to the modern day – to include a spectacular offering of Self-Taught and Outsider Art being offered from the Namits Collection and an equally exciting group of works from the Westervelt Corp. – will come up for bid at a Fine Art Auction slated for Sept. 12th by Nye & Company Auctioneers.

Also for sale are a number of fabulous frames supplied by firms such as Eli Wilner & Co., one of the leading antique frame dealers and restorers, based in New York. The mid-week sale will be held in Nye & Company’s gallery, at 20 Beach Street in Bloomfield. The full catalog is available for viewing at www.nyeandcompany.com, as well as LiveAuctioneers.com and Invaluable.com.

“Whether you like Dutch Old Masters or contemporary works by artists like Robert Motherwell and Helen Frankenthaler, this sale has something to suit your every taste,” said Andrew Holter of Nye & Company Auctioneers, adding, “The group from the Namits collection, in particular, is wonderfully expressive, visually stimulating and reflective of the talented artists who created it.”

The Namits group includes works by Thornton Dial, Purvis Young, Jimmy Lee Sudduth, Harriet Wiseman and Justin McCarthy. It also features a nice selection of paintings and sculpture by European artists such as Francois Bard, Jean-Pierre Ceytaire and Charlotte Cuolot. “We invite everyone to come view the works in person at the live gallery preview or online,” John Nye said.

The aforementioned work by Helen Frankenthaler (Am., 1928-2011) is certain to attract much bidder interest. It’s a color etching and aquatint from an edition of 60, titled A Page from a Book III. Also, a drypoint figural etching by the renowned American mother-with-child artist Mary Cassatt (1844-1926), titled Gardner Held by Mother, signed in pencil, will also come up for bid.

The oil on panel effort by American folk artist Jimmy Lee Sudduth (1910-2007), titled Bear Bryant, is pencil signed. Not every artist in the sale is American. The oil on canvas painting by Jean-Pierre Ceytaire (French, b. 1946), titled La Plage, is signed, dated (“77”) and framed.

The selection of works from the Westervelt Corporation includes two exceptional pieces by Felix Kelly (U.K., 1916-1997), both of which are superb commentaries on the progression of America. One is an oil on board titled Riverboat and Railroad, Daytime, artist signed lower right, dated (“1976”) and with a label on verso from the Kennedy Galleries, Inc.

The oil on board by Edward Lamson Henry (Am., 1841-1919), titled Open Door, is initialed and dated (“1872”) and bears labels on verso from Christie’s, Kennedy Galleries and The Bernice Gallery. Included is a typed note stating it is a picture of the Henry Ives home in Goshen, Conn.

Other offerings from the Westervelt Corporation include an oil on canvas by Raoul Mallais (U.K., 1901-1999), titled Bringing in the Grey Mare, with an accession label on verso; and an oil on canvas by Frank Wootton (Am., 1911-1998), titled The Last Fence, signed and dated “1969”.

Fans of the Old Masters will be intrigued by the oil on canvas Portrait of an Artist from the Circle of Caspar Netscher (Heidelberg 1639-1684 The Hague, the Netherlands). The half-length portrait is rendered with a palette, marble busts and an orange tree. It’s signed “Netscher f”.

The auction will begin promptly at 10 am Eastern. Telephone and absentee bids will be accepted. Previews will be held in the Bloomfield gallery Monday-Friday, September 3rd-7th, from 10-4; and Sunday, September 9th, from noon-4 pm. Light refreshments will be served on auction day.
John Nye had a long and fruitful career at Sotheby’s before he and his wife, Kathleen, acquired Dawson’s in 2003 and started Dawson & Nye. With the move to Bloomfield seven years later, they renamed the business to Nye & Company (Auctioneers, Appraisers, Antiques). The firm is nationwide, but the vast bulk of the business comes from trusts and estates in the tri-state area.
For more information about Nye & Company Auctioneers and the upcoming auction slated for September 12th, please visit www.nyeandcompany.com. The full color catalog is available for viewing at www.nyeandcompany.com, www.LiveAuctioneers.com and www.Invaluable.com.