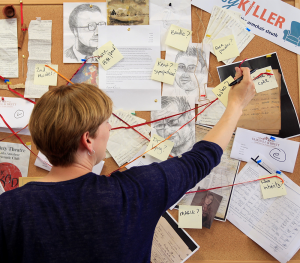 The Story Unfolds from year 1 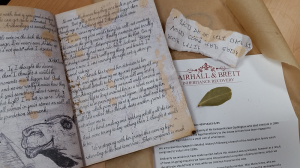 Box 1 in the story includes a burned journal 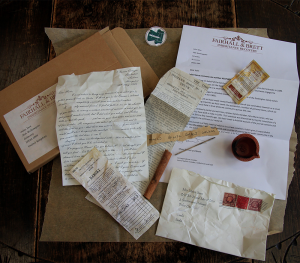 The second box reveals more in the story.

Red Herring Games launches second Kickstarter Campaign today to fund the development of the second story. Pledges also include the option to travel in time!

Cosykiller launched last year after a successful kickstarter campaign in the autumn and the firm look set to achieve their goal within days of launching their second campaign.

“We’ve had such fantastic feedback from players” Jo Smedley, managing director said. “Cosykiller is incredibly popular and has had some fantastic reviews by some of our committed armchairs sleuths. It’s an immersive puzzle game quite unlike any other.”

The unique subscription engages individual players in a self-driven investigation which requires all their intelligence and perception.

Unlike many role playing games on the market which are utilising modern gadgetry, Red Herring Games have returned to the old fashioned era of deduction, presenting the players with documents and artefacts from a bygone era they try to discover the perpetrators of a cold case.

“Digital is no longer a key driver,” Said managing director Jo Smedley, “We knew we were never going to compete with the likes of VR headsets or X-box style games. But what we’ve found is people don’t actually want that. They want to feel part of something special. They want to be immersed in story in a way that only a physical item held in the hand can provide. Last year the story was India based and we included all sorts of spices in the boxes to give the scent of India as the story unfolded. It hit all the senses. And the players have thoroughly enjoyed it – many backed year 2 within minutes of the project launching on Kickstarter.”

Pledges for this year’s Kickstarter also include the option for people to get involved in the spin off project launched by the firm: Cosycruise! A pledge of £350 will give backers the opportunity to join the Red Herring Games team as they bring the first year of Cosykiller to life.”

“After a year trying to solve the mystery of what happened to Marie Jones in India – this is a great chance to meet her in the flesh.” Jo Smedley said.

You don’t need to have played the first year of Cosykiller to enjoy the cruise as the story is set before Marie disappeared.

“It’s designed as a prequel.” Jo Smedley said. “We didn’t want to exclude non-players, but we also wanted to give Cosykiller players a chance to meet the real Marie. The actress playing Marie also provided all the sketches and paintings which were used within our first story – so they really will get to meet the genuine article!”

Cosykiller is the only fully immersive subscription box aimed at the solo sleuth, but it’s also great fun for families and small groups.

“Families and small groups can work together to puzzle out the boxes.” Jo Smedley said. “We imagine over the course of the year players might end up producing their own version of an incident board to help them puzzle through the mystery.”

The company has launched the project on Kickstarter on the 7th September. With only three weeks to run, Red Herring Games are appealing to those interested in joining in with this or last year’s story to pledge now.

Promo trailer for the next story