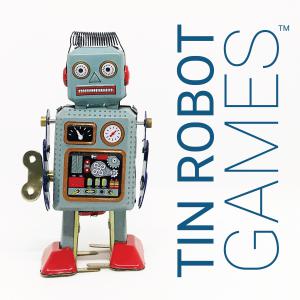 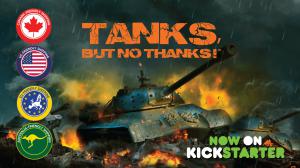 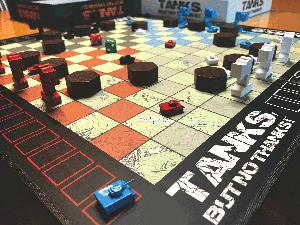 BARRIE, ON, CANADA, September 25, 2018 /EINPresswire.com/ — “Tanks, but no thanks!” is a turn-based, close-combat strategy board game that’s simple to play, but difficult to win.

The game comes with a grid-based board map, several sets of tanks, bunkers and base flags. Two to four players, ages eight and up, can join in by setting up their side of the field and advancing one turn at a time.

Two dice control the mechanics. The game movement is determined by the green die, while the red die is for shooting. Each player can only shake one die per turn, though the green die has a little flexibility (you can split your move across several of your tanks). Think hard about whether you want to move or attack!

Tin Robot Games has a modest $10,000 Canadian ($7,700 USD) funding goal to launch the base level of the game, with a single pledge level of $39 Canadian ($30 USD) plus shipping to get a copy of the game and any stretch targets achieved. Funding stretch targets include an expansion pack and several premium upgrades of game components.

“I made this game 24 years ago when I just began University,” says James Staley, the developer and President of Tin Robot Games. “The original version was made on a cookie sheet with tacks and cut up refrigerator magnets. Finally, there is a platform to take independent games to the market through crowdfunding. We spent hundreds of hours playing this game when I was in school. This past year we have spent hundreds of hours developing a retail-ready version of this game, right up to and including manufacturing samples. We just need to get over the finish line with the minimum production run itself.”

To support the Kickstarter for “Tanks, but no thanks!” today, go to Kickstarter.com and make a pledge.

Game details are available at tinrobotgames.com

Tanks, but no thanks! Now on Kickstarter