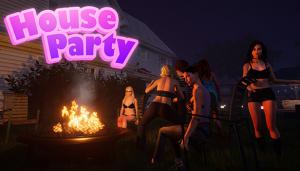 You are Invited to Join the Party!

Gamers are thrilled with the fun, crazy-sexy antics of the House Party Video Game cast.

LOS ANGELES, CA, USA, October 3, 2018 /EINPresswire.com/ — Beaverton, OR (October 2, 2018) – Eek! Games today announced that the recent release of the House Party video game V.0.11.3, released on September 28, 2018, has to date received over 90% positive reviews on Steam. The gaming community has embraced House Party as an intelligent and challenging sexy PC sim game. It’s about crazy real-world situations without the hangover the next morning or a trip to the local clinic.

According to Bobby Ricci, the CEO and Founder of Eek! Games, "The latest release contains a couple of new stories revolving around the party's host, Madison as well as a huge overhaul to the graphics and input system. We are also showing off one of our new character models that's been reworked from the ground up by Mimic productions, who worked on the Avatar movies.".

Eek! warns its players that “terrible things are happening” when they unlock the ‘explicit’ version of the game, unleashing plenty of debauchery, sex and comedic fun between player and the zany, therapy-needing cast. House Party delivers smart sexy fun with a unique gameplay mechanic through an advanced AI system where the player’s every choice influences the reaction and outcome of the game.

Many players have taken the game’s story-telling into their own hands with the Custom Story Creator, which allows players to create their own stories for the game which they can share with others who can play through new experiences and new character reactions for tremendous and fun replay-ability.

Eek! invites Twitch to read what gamers have to say about the House Party video game and what is driving the excellent reviews”….You'd think that a game like this would be "too out there" or so people say about it because of the crude sense of humor and crazy adult content but, the truth to the fact of the matter is that it's actually pretty spot on, a lot of fun, and makes a heck of a lot of sense reflecting real life choices. It's like having your own MTv Jersey Shore on your computer screen to fool around and it really works out quite well!"
And another…”This is the most messed up game I have ever played in my entire life, and I mean that in the best way possible. I laughed so hard throughout the game. I've only gone through one playthough, but there’s a bunch of different endings to get. If you want to have a hard laugh and a hard on at the same time, this game is totally recommended!”

Last week House Party also announced auditions for one male and one female cast character, which are voted for by the House Party community. Each of the winners will get to appear as regular cast members in the game and work alongside the game’s developers to create their avatar and story-arch in the game. http://houseparty.games

The House Party game is available on Steam, at https://store.steampowered.com/agecheck/app/611790/

Eek! Games was started in 2015 by Bobby Ricci who programmed and launched the “House Party” video game.
In 2017 House Party was launched on Steam, as an Early Access game. Even though it was still very premature, the initial reception was surprising and the community built quickly. The game sold over 30,000 copies in the first few weeks and over 300,000 purchased downloads in its first year, alone.
Bobby and Eek! Games have many more game ideas brewing with a new title in the works for a tentative 2020 Early Access release.