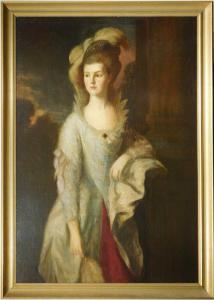 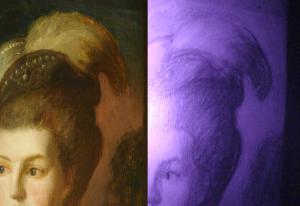 Wood’s infra-red photography revealed a complex and energetic drawing hidden beneath the surface of the paint. 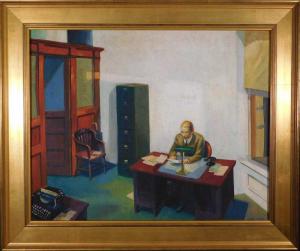 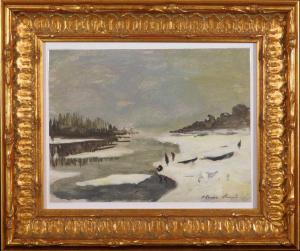 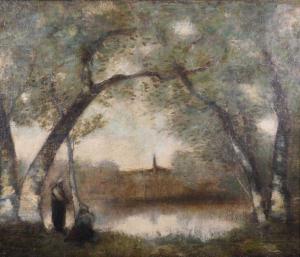 What was initially thought to be an ordinary copy ended with a six-figure finish at the firm’s November 1st fine art auction held online and in Franklin, Mass.

Wood’s examination of the under-drawing and comparison with Gainsborough’s drawing style led to the conclusion that the painting was a precursor to the finished work, which hangs in the Scottish National Galleries in Edinburgh. Still, to be safe, Wood called it an attribution for the sale, but savvy bidders were convinced. The final price, with buyer’s premium, was $103,125.

The painting, in a 40 ¼ inch by 55 inch frame, was in fine condition, though it did show signs of age, furthering the notion it was a study. The cracking was consistent with portraits of the period, including ones in Edinburgh’s National Gallery. Wood’s infra-red photography revealed a complex and energetic drawing hidden beneath the surface of the paint, a convincing revelation.

The selling price outperformed the pre-sale estimate of $75,000-$100,000, cementing the notion that the painting, perhaps Gainsborough’s most intricate and recognizable compositions and one of the finest examples of 18th century portraiture, was indeed by the famed British artist. Wood’s discovery led to an examination of another Gainsborough in the Museum of Fine Arts in Boston.

But his investigation wasn’t limited to stateside research. Wood hopped a flight to Edinburgh to view The Honourable Mrs. Graham up close and personal, and perform infra-red photography there in the gallery. What he learned led to a deeper understanding of Gainsborough’s working methods. The artist was very precise when rendering fine fabrics, jewels, hair and accoutrements.

The hair in the painting was of particular interest to Wood. The infra-red technology led to his discovery of how he rendered the sitter’s coiffures in such a dynamic manner – an underlying sketch in black chalk. When highlighted with paint, the quick, vertical strokes of black chalk added to the dynamism of the sitter’s fashionable up-do and added depth to the static portrait.

The technique prompted further investigation by Wood, who found similar under-drawing technique not just on the painting in Scotland but also Gainsborough’s works titled Haymaker and Sleeping Girl, both done in the 1780s and now housed in Boston’s Museum of Fine Arts.

Gainsborough was also adept at drawing elegant hands. In The Honourable Mrs. Graham, the hands extend from an already elongated wrist and end seamlessly into her gown. The elongated, clutching fingers enhance the elegance of the sitter and pronounce the dainty features of his elite, sophisticated clientele. An infra-red photo revealed quickly sketched hands in the under-drawing.

The variation on backgrounds is probably the clearest indication that the work sold was a preparation sketch. The background of the exhibited version in Scotland is a quintessential Gainsborough Rococo landscape, with an undulating, verdant hill and exquisitely rendered trees that would lay the groundwork for British Romanticism in the subsequent decades to come.

The study, however, displays a more somber (but equally striking) tone. The bucolic hillscape is replaced with a seemingly opaque mass of darkness, capped by an eerie sunset, providing a stark contrast to the delicate, pale white Mrs. Graham. It is reminiscent to the background in a 1759 Gainsborough Self-Portrait, and adds a dynamic to the rigid rules of 18th century portraiture.

Interestingly, the subject in the painting was born Mary Cathcart, the daughter of the Scottish ambassador to Russia. She spent her early years at the Court of Catherine the Great before her marriage to Thomas Graham in 1774. She was one of the most beautiful women of her time and Gainsborough, smitten with her himself, painted her multiple times, most often from memory.

Woodshed Art Auctions is a family-owned art gallery specializing in oil painting restoration and live and online art auctions, celebrating its 50th anniversary. The firm is always accepting quality artworks for future auctions. To inquire about consigning a single piece or an entire collection, you may call Bruce Wood at 508-533-6277; or, e-mail him at bruce@woodshedartauctions.com.