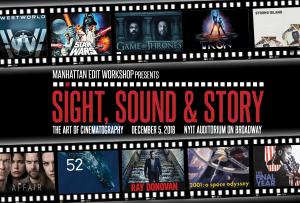 We are incredibly excited to host these conversations with such an amazing group of cinematographers.”
— Jason Banke

NEW YORK, NY, UNITED STATES, November 28, 2018 /EINPresswire.com/ — Manhattan Edit Workshop, the east coast leader in education for content creators, announces the return of “Sight, Sound & Story: The Art of Cinematography” on December 5th at the NYIT Auditorium Theater on Broadway. This year’s event showcases some of the industry’s leading cinematographers behind worldwide hit TV shows including “Game of Thrones,” “Ray Donovan,” and “Westworld”; pioneers of cinematic production on classics such as “Star Wars – Episode IV: A New Hope,” “Tron,” and “2001: A Space Odyssey”; and cinematographers that shot award-winning documentaries “Strong Island,” “Finding 52,” “Inventing Tomorrow,” and “The Final Year.” Additionally, attendees will have the opportunity to speak directly with top gear companies including our Platinum Sponsor ZEISS; with Adorama, Vimeo, Shutterstock, and Padcaster at our Networking Party & Tech Lounge, sponsored by ZEISS. There will also be exclusive raffle prizes for attendees. Executive Producer Jason Banke comments, “Each year we strive to bring the most talented and innovative artists to the New York community of filmmakers and DP’s. We are incredibly excited to host these conversations with such an amazing group of cinematographers.” Banke adds, “We wouldn’t be able to throw this year-end educational event without the support of our generous partners.”

“Sight, Sound & Story: The Art of Cinematography” opens its doors on December 5th at the NYIT Auditorium on Broadway. Limited seating left, discounted tickets here: http://bit.ly/2DIwBXE. Cost includes a ticket to all panels and networking party with an open bar, hors-d'oeuvres & sponsored giveaways.
To inquire about tickets or partnership opportunities please contact jason@mewshop.com.