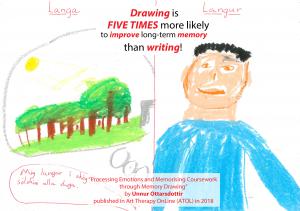 Drawing linked to improved retention of knowledge compared to writing

REYKJAVIK, ICELAND, December 28, 2018 /EINPresswire.com/ — It seems the kids who doodle and draw in their notebooks during class might be onto something.

In a study recently published in the journal ATOL: Art Therapy OnLine, 134 subjects were asked to draw the content of certain words and write other words down. Some participants recalled what they had written and drawn after three weeks, and others after nine weeks. In both cases, words that were drawn were more successfully recalled than words that were written. After three weeks, the median number was two to one in favour of drawn words. After nine weeks, that ratio grew to a staggering five to one in favour of drawing.

“The person appears to automatically turn the act of drawing into long-term memory,” says study author and art therapist Unnur Ottarsdottir. “This is the first time this type of research on such a long-term memory has been conducted worldwide prior to now, as far as we are able to tell, and the findings are very intriguing.”

Ottarsdottir began practising and researching art therapy in the early 1990s. She has published, spoken and taught at conferences and universities around the globe on the subject. Not only is drawing more effective than writing at stimulating long-term memory, says Ottarsdottir, but it is also useful for processing and working through emotions. Ottarsdottir also conducted another related research study with five children who had experienced stress or trauma and had specific learning difficulties. The children drew pictures partly to memorize coursework material, but Ottarsdottir found indications that the drawing could also relate to processing of emotions associated with difficult or traumatic experiences.

“It appears that in drawing, the children often manage to express vulnerable and complex feelings more easily than they do when speaking,” says Ottarsdottir. “Art therapy theories and methods are important in order to understand this process, and we hope that we can learn more about how art making can help us make further breakthroughs in this area in future studies.”

Ottarsdottir is available for interviews about the study and its findings by clicking on the contact information included in this release. The full paper on the experiment, “Processing Emotions and Memorising Coursework through Memory Drawing,” was published in ATOL: Art Therapy OnLine, and can be viewed at http://journals.gold.ac.uk/index.php/atol/article/view/486/pdf.