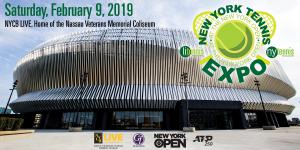 We have assembled a great set of speakers for each respective panel, which will be co-headlined by an ATP player from the New York Open field.

Nick Bollettieri is considered by many to be one of the best tennis coaches of all time. He has helped shape the careers of Andre Agassi, Serena Williams, Maria Sharapova, Jim Courier, Boris Becker, Monica Seles, and other tennis champions. In 1978, he founded the Nick Bollettieri Tennis Academy—now IMG Academy, the first full-time tennis boarding school, providing young athletes the opportunity to train at a higher level while pursuing their academic aspirations with a focus on intense physical training, total immersion and ongoing competition among the most talented players in the world.

Luke Jensen is the Director of Racquet Sports at The West Side Tennis Club in Forest Hills, N.Y. An All-American at the University of Southern California, Jensen went on to win 10 ATP Tour doubles titles, as well as the 1993 French Open doubles championship with his brother, Murphy. He also competed on the 1991 and 1992 United States Davis Cup teams. After his playing career, Jensen coached the women’s tennis team at Syracuse and served as a tennis analyst for ESPN.

Ricardo Acioly is a Director at the Evert Tennis Academy, after advising Chris and John Evert for the last year. He is a former member of the Brazilian Davis Cup Team who was ranked in the Top 50 in the ATP doubles rankings. During his career, he won 3 titles in Vienna, Geneva and Guaruja. He also played in the Seoul Olympic Games and in all Grand Slams. Ricardo has coached several top players including Marcelo Rios, Gabriela Sabatini and Fernando Meligeni. He served as Davis Cup Captain for Brazil for six years and during his tenure as the team reached the semifinal in the World Group.

Phil Antohi is currently a coach at Christopher Morley Tennis. He was one of the best junior tennis players on Long Island, competing on the USTA National Training team and ranked inside the Top 10 nationally, before going on to play college tennis at Cornell University. He was mentored by and still coaches alongside famous coach Robert Lansdorp.
Lisa Dodson is the developer and owner of Servemaster, A USPTA Elite Professional and a former WTA world-ranked player, Dodson is also a national speaker and serve specialist. She is currently the Director of Tennis at Shenorock Shore Club in Rye, NY.

Dr. Tom Ferraro has been a psychoanalyst and sport psychologist in full time private practice and is a pioneer in the field of depth sport psychology. He practices out of Williston Park and has been affiliated with numerous professional organizations including the Women’s United Soccer Association, the New York Lizards, Tour Edge Golf Company and NYU Winthrop Hospital. He works with a variety of professional and elite athletes in the fields of tennis amongst other sports. In addition he is a syndicated columnist, an author and his work has been featured in The New York Times, The Wall Street Journal and The London Times and Golf Digest.

Jay Harris is the Co-General Manger/Director of Tennis at SPORTIME Roslyn and the Director of John McEnroe Tennis Academy’s College Recruiting Combine. He was the Head Men’s Tennis Coach at Brown University for eight years, before joining SPORTIME in 2010. The most successful coach in Brown history, he led the program to two Ivy League titles and seven straight NCAA Tournament appearances. Prior to Brown, Harris coached at Bowling Green University where he led the team to two Mid-American Conference titles.

Gustavo Loza is the USTA Eastern Tennis Service Representative for New York City. He served as an assistant coach for the St. John’s Men’s team where he helped lead the Red Storm to back-to-back Big East titles, the first two in the program’s history. He played two years for the University of Oregon, where he was nationally-ranked. After Oregon, Loza played two years at St. John’s.

Ben Marks is Director of Junior Tennis at Carefree Racquet Club, and Director of Tennis at Cold Spring Harbor Beach Club. He previously worked at the John McEnroe Tennis Academy, and was the Cold Spring Harbor Varsity Head Coach for three years, earning Nassau County Coach of the Year Honors in 2014. He played number one and number two singles for Norfolk State University, and number one doubles—reaching a career-high regional ranking of ninth in the Atlantic Region. He is a 2015 National Open Doubles Champion. In 2018, he was named USTA Long Island’s Tennis Professional of the Year.

Rob Polishook, MA, CPC is the founder and director of Inside the Zone Sports Performance Group. As a mental training coach, his focus is on the athlete as a person first and recognizes the strength of being “More” than an Athlete. His bestselling book Tennis Inside the Zone: 32 Mental Training Workouts for Champions is sold nationally and internationally. He has spoken at USTA, USPTA, ITA conferences, and has conducted workshops India, Israel and the Omega Institute. His work has been highlighted in ESPN’s 30 for 30 series, Sports Illustrated and the NY Times.