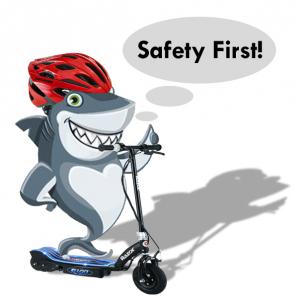 Let’s talk about what should actually be frightening you

IRVINE, CALIFORNIA, UNITED STATES, January 29, 2019 /EINPresswire.com/ — Listening to the news on the way into work today-I heard two interesting back to back articles about injuries. The first one-sighted a reduction in the number of shark bites in 2018. Amazingly, sharks took a chunk out of somebody 66 times last year and there was one unfortunate fatality in Massachusetts that came of that.

By contrast in West Los Angeles alone, 228 scooter riding patrons were admitted to two hospital emergency rooms due to scooter accidents. 40% of whom sustained head injuries.

Bottom line-when we worry about a shark attack-we are worrying about the wrong thing. The rate of incidents is so low that you would have a greater chance of winning the lottery or dying by being struck by lightning-heck even a wild boar attack resulting in death would be much more likely.

So give some thought to wearing a helmet the next time you rent a scooter to protect against a real and present danger of brain trauma. Try not to tease any wild boars the next time you encounter one-and by all means- get off the couch and don some scuba gear & discover the other 70% of your planet with peace of mind.