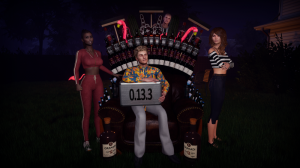 The House Party video game just released 0.13.3 and is now providing indie musicians with a new forum for discovery

This is our biggest House Party game update yet! We have brand new content, an awesome new music by some amazing up and coming indie artists and a great new LGBT-inclusive story! Many game firsts!””
— Bobby Ricci

Music is a big addition to 0.13.3 and another first for Eek! who opened its game to provide exposure to independent music artists. The team congratulates Popskyy (from Texas) and his song “FUNKBOX” as the winner of the House Party game music competition. The placed winners were Fokushi and the song “Dreamer”, Treclar and the song “Whip-its”, Kitanic Demon and the song “Chillax with KitanicDemon” and Fletnyx and the song “Chocolate Chip Cookies. This competition was truly international, with winners coming from France, New Zealand, Sweden and Austria, respectively.

Bobby Ricci, the CEO and Founder of Eek! Games was delighted by the quality of the artists and music submissions. "House Party makes another mark in the book of 'Video Game Firsts.’ Congrats to our winners! The tracks were awesome!”

New features added in House Party’s 0.13.3 update include a music selector, which is loaded with all the music contest’s winners, a new environment for romantic encounters, a groping mechanic (with all the consequences one could imagine), and an enormous amount of new items and interactions. Players should certainly check out the AI personality who lives in a briefcase. A real head-scratcher. In 0.13.3 we also have the first introduction to Leah, a brand-new character in House Party. She’s a lover and a fighter, and this Patrick-centric update even has a mini storyline just for Leah.

For a long time the Eek team has wanted to open up their gameplay to enable storylines and intimacy sequences that appeal to a broader audience, with a wider variety of sexual preferences, and 0.13.3 is their first step in doing just that. Patrick’s newest storyline includes our first major foray into providing such experiences, and will be the first of hopefully new types of storylines that their diverse fanbase can enjoy.

Up until now, the House Party video game has had just one song in rotation through its game. Its founders and creatives realized that a party needed to have more than one repeating song, so in early February 2019, Eek! invited independent music artists to submit their music for playback in the House Party game, which today has enjoyed over 1 million downloads worldwide.
Music fans are discovering new music from alternative sources, such as social media, TV shows and movies, and of course through video games. And it’s not just the players who get to enjoy the music they discover in these games, but also the enormous audiences who are watching these games being played by streamers on YouTube and Twitch. Hundreds of millions of fans watching billions of hours of content are being exposed to music from these talented independent musicians, providing them the tremendous exposure they seek. The winner, Popskyy said, “FUNKBOX is a fairly new song of mine. Someone brought up the House Party contest to me and said I should enter. So, I submitted FUNKBOX because I felt it was the perfect fit. Because you know… It sounds like an 80's adult film tune. LOL" Popskyy’s “FUNKBOX” is certain to entertain players as they experience the hilarious antics of the House Party game. Placed winner, Fletnyx went on to add, “I like to associate my music compositions with the things I enjoy most in life, one of them being video games.”

Eek! Games awarded the 1st Place winner $1,000 in cash, and the four other great talented artists $250 each. All the winners’ music compositions will be played throughout the House Party game for players’ enjoyment and to enhance the game experience. Players will get to experience the new House Party soundtrack in the latest release of the game, which is available right now.
Due to the success of the music search competition, Eek! Games will run a similar competition in the future to provide its game with new fresh music content, and budding artists with a rising platform for exposure and discovery. Musicians be warned though, House Party is not your mother’s sim game. It’s quite risqué in nature and touches on topics of debauchery, sex and comedic fun between player and the zany, therapy-needing cast. At its core, House Party is also a smart sexy game, delivering a unique gameplay mechanic through an advanced AI system whereby the player’s every choice influences the reaction and outcome of the game.

The gaming community has embraced House Party as an intelligent and challenging sexy PC sim game. The players and community acknowledge it as ”One of the most fun dating/hookup sims.”

About Eek Games!
Eek! Games was founded by programmer Bobby Ricci in 2015 with “House Party” as its first release. In 2017 House Party launched on Steam as an Early Access game. Even though it was still very premature, the initial reception was surprising and the community built quickly. The game sold over 30,000 copies in its first few weeks and over 300,000 in its first year alone.