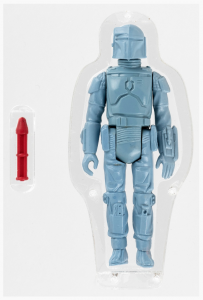 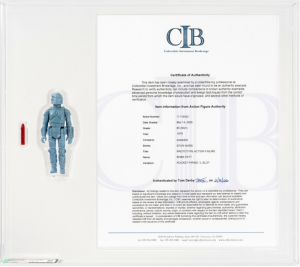 YORK, PENNSYLVANIA, USA, July 17, 2019 /EINPresswire.com/ —
Hake’s Auctions of York, Pa., has confirmed that a rocket-firing Boba Fett action figure that sold for $112,926 in their July 11 online event set a new world auction record for a Star Wars toy. Also, it now goes on record as the first Star Wars toy to break the six-figure barrier.

The 3.75-inch prototype, which was intended to be part of Kenner’s licensed toy line for The Empire Strikes Back, was displayed at the 1979 Toy Fair in New York City but never made it into mass production. While some speculate that the toy was pulled from the production line after being deemed a possible safety hazard to children, many Star Wars scholars have concluded that its removal was more than likely due to a production issue with the rocket-firing mechanism. Either way, the Boba Fett rocket-firing prototype went on to become one of the rarest of all Star Wars toys and is highly revered in the collecting world. It was graded AFA 85NM+ and offered with a certificate of authenticity.

The price paid for the prototype exceeds the previous auction record for a Star Wars toy – also held by Hake’s – by more than $26,000.

"Star Wars toys have become classic collectibles," said Hake's president Alex Winter. "They resonate with multiple generations. Hake's has specialized in pop culture for over fifty years, and we've only seen a few other collectibles categories — comic books and original comic art being among them — that could rival Star Wars in terms of collector interest and increasing value."