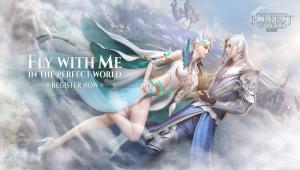 SAN FRANCISCO, CALIFORNIA, USA, August 9, 2019 /EINPresswire.com/ — Perfect World Games has announced today that Perfect World Mobile will be available for EU players to download on Aug 21, excluding Russia and CIS, and the game will be officially released at 10:00 am, UTC+1 on August 22. Alongside the arrival of EU servers is the reveal of an all-new story trailer.

Delving into the storied past of Perfect World and the denizens within it, the trailer gives players a glimpse of the adventure to come in Perfect World Mobile.
Having already found massive success with its release in China, Perfect World Mobile brings the beloved story, characters, and experiences of the beloved 12-year MMO classic. Recently Perfect World Games announced the pre-registration for English servers, now European players will have the opportunity to visit Perfect World on iOS and Android devices.

As a storied franchise, Perfect World features a rich history of the world’s inhabitants. Humans, Winged Elves, and Untamed once coexisted in peace in Perfect World, now having discovered Heaven’s Tear war ravages the once utopia of Perfect World. War has reawakened the fabled Wraiths that have long been forgotten. Now players will face nightmarish creatures, in their fight to restore Perfect World to the heavenly place it was.

Players in NA and EU can pre-register now to experience Perfect World Mobile on iOS and Android devices and will receive a rare outfit on the first character they create. Perfect World Games will also be giving out tiered pre-registration rewards giving players more as pre-registration sign-ups increase including a rare mount, an open beta exclusive title, dye packs, in-game currency, and equipment socket bonuses.

A list of features includes:
– Massive continent – 60,000 square kilometers panoramic three-dimensional map for players to explore
– Perfect World Reinvigorated – next-gen graphics bring new life to the beloved places of Perfect World with realistic light and shadow effects
– Long-loved playable races – playable races of humans, Winged Elves, and the Untamed
– Rich class choices – experience the classes from the original game, each class brings its own distinct characteristics
– Unique flight system – take to the skies with the flight system found in the original game
– Epic combat – engage in combat in the air, on land or in the oceans
– Spirit-based skill enhancement system – immerse yourself in the balance of Yin and Yang
– Oriental-inspired art style

Perfect World Investment & Holding Group is a globalized cultural and entertainment group, which has introduced its products to over 100 countries and regions around the world, including North America, Europe, and Asia. The company has established dozens of branches in domestic cities, such as Beijing, Hong Kong, Shanghai, Chongqing, Chengdu, and Zhuhai, as well as countries, including the US, the Netherlands, France, South Korea, and Japan. At present, Perfect World Investment & Holding Group is involved in business segments including movies & TV, games, cinemas, animation, literature, media, and education.