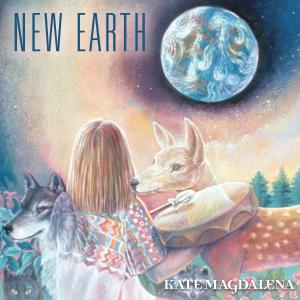 And I saw a new heaven, and a new earth, for the first heaven and the first earth had passed away.

If the collective imagination has power, holding the image of the earth healed and whole may serve us.”
— Kate Magdalena

SAN FRANCISCO , CALIFORNIA, UNITED STATES, August 22, 2019 /EINPresswire.com/ — Into the dark pond of looming environmental challenges, Kate Magdalena offers her latest song “New Earth.” Like the calm at the center of a storm, the song and accompanying artwork by California visionary painter Suzanne De Veuve, posit an earth healed and whole, a living planet in a universe created by a loving intelligence. Beyond the human ravages upon nature, the earth continues to pour its abundant life upon humankind, and if given the chance, can heal. Beyond the human manipulation of the earth’s natural systems, beyond the threat of nuclear disaster, beyond the destruction of the earth’s forests and oceans, beyond the wars, Kate puts forward the picture of the earth healed. If the collective imagination has power, as Carl Jung expressed, then holding a picture of the earth healed and whole may serve as a constructive inspiration, offering possibilities that the opposing view does not. The song also echoes the words powerfully expressed in the Bible, "For behold, I create new heavens and a new earth, and the former things will not be remembered, nor come to mind." Isaiah 65:17

“New Earth” is the most recent release from Kate’s upcoming album “A Larger Dance,” coming this October. The recordings have been produced by GRAMMY-nominated producer Billy Smiley (Johnny Cash, Whiteheart, Clay Aiken, and the Newsboys) and feature some of Nashville’s finest musicians with Fred Eltringham (The Wallflowers and Sheryl Crow), Byron House (Robert Plant and the Band of Joy), Blair Masters (Garth Brooks) and Brennan Smiley (The Technicolors).

To listen to the song: https://open.spotify.com/album/5IsEow1yv3RGITSyUkYVjC

To view the music video: https://www.youtube.com/watch?v=5nz79YydQrc

To receive a free MP3 download of NEW EARTH as a gift: https://katemagdalena.com/new-earth/

Kate Magdalena is a singer-songwriter out of Northern, CA. She has an ability to move listeners with her clear voice, to bring healing, joy, and deep feeling. Magdalena was raised in an era in which people looked to the arts and music to inspire social change. In the tradition of Bob Dylan, some of her music is directed to the pressing issues of the time. She is looking forward to bringing her songs to listeners throughout the world both through the internet and in live performance.