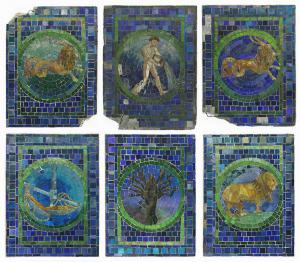 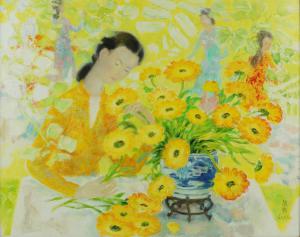 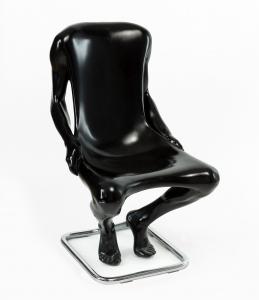 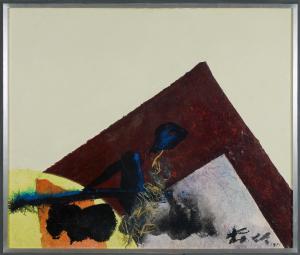 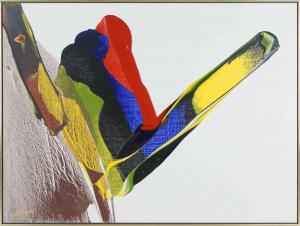 The sale will be held online and in Susanin’s gallery at 900 South Clinton in Chicago. Start time is 10 am Central, with online bidding via LiveAuctioneers.com

CHICAGO, ILL., UNITED STATES, August 28, 2019 /EINPresswire.com/ — A collection of Tiffany Studios mosaic glass zodiac panels and favrile glass mosaic tiles, an oil on canvas painting by Vietnamese artist Lê Phổ (1907-2001), and a lacquered polyurethane Homme Chair with a tubular steel base by Ruth Francken (Czech-American, 1924-2006) are just a few premier lots in Susanin’s Fall Premiere Auction slated for Friday, Sept. 20th. Also to be sold is a collection of antique furniture and fine art from the estate of Lt. Gen. Hanford MacNicder and his son; and a collection of mostly early-to-mid-20th century Native American basketwork.

With a robust pre-sale estimate of $100,000-$120,000, the collection of Tiffany Studios panels is easily the expected top lot of the auction. The lot consists of six mosaic glass zodiac panels from the Marshall Field & Company Men’s Grill, depicting Aquarius, Libra, Leo, Cancer and two Capricorns; and a grouping of loose favrile glass mosaic tiles, also from Tiffany Studios.

The oil on canvas by Lê Phổ, titled Les Soucia, is artist signed lower right and measures 32 inches by 39 inches (sight). It has an estimate of $50,000-$70,000. Lê Phổ was born in Vietnam and studied at the Ecoles des Beaux-Arts in Paris under the instruction of Victor Tardieu, a friend and companion of Henri Matisse. Lê Phổ’s works are highly prized by collectors.

Ruth Francken executed her famous Homme Chair in 1971 when she applied plaster directly to a male model (homme is French for “man”). The cast of his lap was smoothed and finished with lacquered polyurethane, then a base was fashioned from stainless steel tubing. A limited edition of the chair in various colors was sponsored and a black version will be featured in the sale with an estimate of $20,000-$30,000.

A large acrylic on canvas by Paul Jenkins (American, 1923-2012), titled Phenomena Summer Solstice and measuring 48 inches by 64 inches, has an estimate of $30,000-$40,000. The work is signed lower left and dated 1982. Jenkins was an Abstract Expressionist who came of age during the heyday of the New York School and carried on its tradition of manipulating paint and canvas.

An acrylic and collage on canvas by Chuang Che (Chinese, b. 1934), titled Autumn Landscape, is expected to hammer for $15,000-$20,000. The work, signed lower right and dated 1971, is 34 inches by 40 ¼ inches (sight). Chuang Che is active today and splits his time between Michigan, New York and China. He is known for his collages and Abstract Expressionist works.

A Charles and Ray Eames for Herman Miller desk and return has a pre-sale estimate of $2,000-$4,000. The birch top desk has red, white, yellow, blue and black sides; the return is yellow and blue, sided with a birch top and three drawers. Also, an oval glass-top cantilevered Lunario high table on a steel base by Cini Boeri (Italian, b. 1924) for Knoll, should command $1,000-$1,500.

Returning to fine art, two works are expected to garner keen attention. The first is an oil on canvas laid down on board by Edouard Cortes (French, 1884-1969), titled La Madeleine, Le Soir. The painting is signed lower right and measures 18 inches in height by 21 ½ inches wide (sight).

The second is a lithograph in colors by Marc Chagall (Russian/French, 1887-1985), titled Le Fenetre Entrouverte (1975), artist signed in pencil and numbered (43/50). The litho measures 17 ¼ inches by 13 ¼ inches. Chagall (real name: Moishe Shagal) was active in New York, France (where he was a member of the Ecole de Paris) and the Russian Federation. He was known for abstract village theme paintings and public art. Each painting is estimated at $6,000-$8,000.

To learn more about Susanin’s Auctioneers & Appraisers and the Fall Premiere Auction planned for Friday, September 20th at 10 am Central, visit ww2.susanins.com. Updates are posted often.