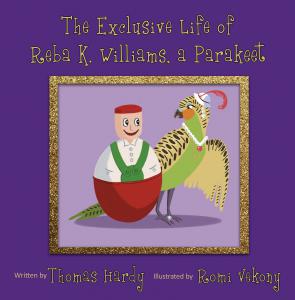 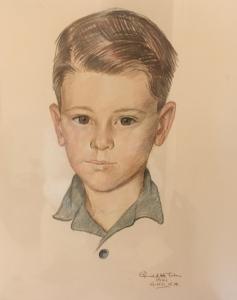 Children Need Time to Have an Imagination

VERO BEACH, FL, USA, August 1, 2019 /EINPresswire.com/ — "An imagination is something you own. It is yours, and yours alone. No one can give you an imagination and no one can take yours away,” Thomas Hardy says to young readers, publishing book one of The Exclusive Life of Reba K. Williams, a Parakeet.

Thomas Hardy was a little boy in Hollis, New Hampshire when he dreamed up adventures for his pet parakeet who shared his room. It was a time when television was only an idea and little boys were encouraged to use their imagination to pass the time.

Reba K. Williams, a parakeet from Beverly Hills, California, is admired and respected by all who know her.

Married to a movie star and then to a roly-poly plastic man she calls “Happy,” Reba is sophisticated with expensive jewelry and famous friends. But when she moves to a farm in New England, she finds herself called upon to help her husband campaign for the governorship of Vermont.

"Perhaps by reading these books, you will begin to understand how much fun it is to have an imagination, to dream something up and then write it down. Take some time to write a story like Reba and Happy."

The Exclusive Life of Reba K. Williams, a Parakeet is available at Amazon.com, Barnes and Noble and other retailers.

Mr. Hardy lives in Vero Beach, FL, where is the co-founder of a new Young Authors Program teaching fourth and fifth graders how to be journalists. The innovative new Program is about learning journalism by doing it.

Mr. Hardy is a member of the National Press Club, The Columbia Journalism Review, The Society of Professional Journalists and The LIONs Den, a private Facebook group for CEO-level Local Independent Online News Publishers. HIs 501 (C) (3) online news site is: www.verocommunique.com 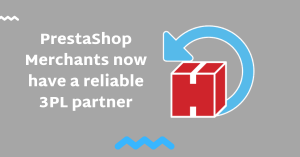 Acutrack, a Silicon Valley based technology driven 3PL, has joined forces with PrestaShop, an open-source commerce platform based in Paris, France.

PrestaShop’s mission is to give anyone, anywhere, the resources to open up and run a successful business and ultimately, become a one-stop platform for eCommerce worldwide. PrestaShop allows you to create a good content management system by enhancing the e-commerce platform. Thus, providing a great consumer experience.

Acutrack’s partnership now gives the PrestaShop merchant a fully automated, closed-loop fulfillment solution – a technology-driven 3PL partner. Acutrack’s presence on both U.S. coasts allows merchants to send products in 2 days to cover practically all areas of the country. This will help save money by cutting down on high zone, high-cost shipments.

Additionally, Acutrack’s book print and fulfillment services give these merchants the ability to expand and offer physical books in conjunction with ebook fulfillment.

“Like PrestaShop, Acutrack’s mission is to become a global fulfillment provider,” says Raj Barman, CEO Acutrack. “We are excited about the partnership with PrestaShop – a step in the right direction. The PrestaShop merchant now has an experienced 3PL who they can trust for reliable service.”

About PrestaShop
PrestaShop is a freemium, open-source e-commerce solution. The software is published under the Open Software License. It is written in the PHP programming language with support for the MySQL database management system. PrestaShop is currently used by 270,000 shops worldwide and is available in 60 different languages.

About Acutrack
Acutrack, based in Livermore, CA, is a privately-held and technology-driven fulfillment company that specializes in publishing any product needed for your business. The company’s ability to produce books and media packages has created a true value to its customers for over 25 years. Acutrack maintains warehousing facilities strategically located on both U.S. coasts.

PUNE, INDIA, August 1, 2019 /EINPresswire.com/ — Labeling and Artwork Management (LAM) is both a discipline and an ecosystem of applications that govern product content data to create compliant labeling that can be viewed on traditional product packaging, online or in the supply chain.
In 2018, the global Labeling and Artwork Management Application market size was xx million US$ and it is expected to reach xx million US$ by the end of 2025, with a CAGR of xx% during 2019-2025.

The report covers a detailed analysis of significant factors that impact the Labeling and Artwork Management (LAM) market considerably. The report accurately describes the factors that are driving, challenging, and restraining the market growth over the valuation period. It also includes the characteristics that are expected to create possible opportunities for market players to achieve an inclusive understanding of the market.

Market segment by Type, the product can be split into
Cloud-Based
On-Premises

Market segment by Application, split into
Education
Government
Enterprise
Other 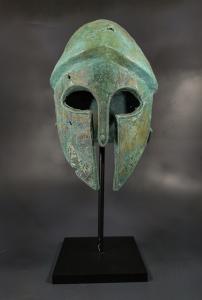 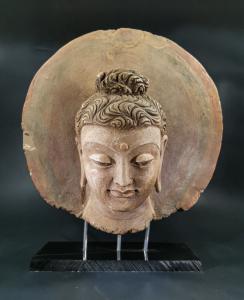 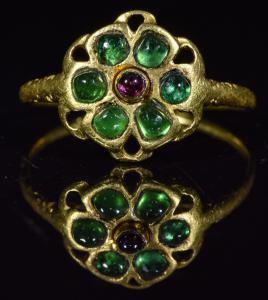 LONDON, ENGLAND, August 1, 2019 /EINPresswire.com/ — To collectors of ancient art and numismatics, scholarship and provenance are the two most important points to consider before making a purchase. It is no coincidence that those same criteria are the cornerstones of Pax Romana, Britain’s premier dealers and auctioneers of antiquities and coins.

Located in central London in a two-story gallery directly opposite the venerable British Museum, Pax Romana specializes in the appraisal, authentication and sale of genuine artifacts from the world’s greatest cultures. The company reserves its finest pieces for its auctions, the next of which will be conducted on Saturday, August 10. Absentee and Internet live bidding will be available worldwide through LiveAuctioneers.

“We are not simply the ‘middle man’ auction house,” explained Pax Romana director Dr. Ivan Bonchev (PhD University of Oxford), an art connoisseur with years of experience and training in his chosen field. “Our mission is to promote the importance of ancient art and coins, encouraging collectors, investors and history enthusiasts to acquire high-quality art and enjoy the thrill of possessing historical artifacts.”

That mission is amply fulfilled by the selection Dr. Bonchev has chosen for the August 10 auction. There are 601 lots of expertly curated art, relics, coins and jewellery from Ancient Egypt, Greece and Rome; the Near and Far East; and the Holy Land, as well as marvelous discoveries from the Bronze Age and periods when Viking/Norse cultures flourished. The catalogue is divided into five distinct sections: Ancient Jewellery, Ancient Coins, Classical Antiquities, Ancient Weaponry, and Asian Antiquities.

One of the sale’s top highlights is a Greek Corinthian bronze helmet that originally would have been a critical form of protection for a Spartan warrior. Dating to circa 600 BC, the helmet has curvilinear eyeholes that taper to a point, a wide nose guard and broad cheek pieces that leave a vertical opening for the mouth. The property of a London art expert and formerly in an old British collection, it is estimated at £30,000-£50,000 ($37,500-$62,250). From approximately the same timeframe, an extremely rare Greek terracotta figure of Demeter and Persephone, circa 500-400 BC, is offered with its original TL test certificate from Ralf Kotalla. Estimate: £3,000-£4,000 ($3,750-$5,000)

A substantial selection of Asian art includes several treasures of the ancient kingdom of Gandhara (present-day Pakistan and Afghanistan). “Alexander the Great conquered Gandhara in 300 BC, and the Indo-Greek kings who followed him introduced classical traditions that would influence Gandhara art for the next seven centuries,” Dr. Bonchev noted. Those influences are reflected in a substantial stucco head from a monumental statue, modeled in classical Hellenistic style, complete with halo and original pigments, estimate £10,000-£15,000 ($12,500-$18,675); and a schist panel depicting the muscular god Atlas in a seated pose, estimated at £2,000-£3,000 ($2,500-$3,750). Both date to circa 200 AD. Executed in the traditional Greco-Buddhist tradition, a massive stucco bust of a female figure wearing an ornate headdress and with curly Mediterranean hair and a topknot, circa 400 AD, is expected to make £1,000-£2,000 ($1,245-$2,500).

Over the past several years – perhaps due to the global fascination with Game of Thrones – many new and enthusiastic collectors have discovered Viking artifacts. During their time, Viking metalsmiths were renowned for their ability to produce unfailingly reliable arms and armaments. Pax Romana will present several exceptional examples in their August 10 auction, including a hand-forged iron sword with three-lobe pommel and decorated guard, mid-10th century AD; and a Medieval four-plate iron helmet with intact nose guard, circa 800-1100 AD. Each of these rare and coveted pieces carries a £10,000-£15,000 ($12,500-$18,675) estimate.

Anther popular category is wearable European jewellery, especially those items created during the Medieval and Post-Medieval periods. A rare and extremely beautiful British Medieval (circa 1400 AD) gold ring is set with green emeralds and a central amethyst set in an openwork floral-shape bezel. The ring is of a type that would have been worn only by the highest-status aristocratic ladies, usually from the King’s court. Its estimate is £5,000-£8,000 ($6,225-$9,960). A gold fede/betrothal ring shaped as clasped hands, from the Late Medieval/Tudor period (circa 1500 AD), comes to auction with a £2,000-£3,000 ($2,500-$3,750) estimate.

A third ring worthy of special mention is an extremely rare 17th/18th-century Post Medieval falconry ring bearing the crest of “De Gaulle.” It is either French or British made and may have a connection to the Charles de Gaulle family of France. Estimate: £3,000-£5,000 ($3,750-$6,225)

All auction items sold by Pax Romana are accompanied by a professional Certificate of Authenticity. The company ships worldwide, and all packing is handled by in-house specialists. View the fully illustrated catalog and bid absentee or live online through LiveAuctioneers.com. For questions about any item in the August 10, 2019 auction, call Dr. Ivan Bonchev, Director, Pax Romana, on +44 758 5515618 or email enquiries@paxromana.auction.