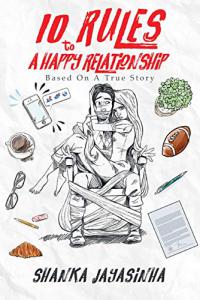 Based on a true story, 10 Rules to A Happy Relationship delivers the comedic point of view of Michael, a pragmatic, male, feminist going through an abusive relationship. Twenty-year-old Michael is a college athlete in Los Angeles who suffers a career-ending injury. When he decides to go back to France for rehabilitation, Michael meets the beautiful Veronica, a seemingly kind blond girl with whom he rapidly falls in love and begins a relationship. The newly-formed couple faces the challenges of a long-distance relationship when Michael must return to the USA to finish his degree. After going to great lengths to please Veronica, he returns to France for the greater good of his romance. Unfortunately for him, Veronica turns out to be abominable. From lies and blackmail to threats and violence, Michael finds himself quickly overwhelmed by the French woman and her entourage.

“The author shows how to avoid and react to an abusive and manipulative partner, by creating a simple set of rules anyone could follow, regardless of gender. He manages to find balance while examining behaviors and stereotypes, breaking them down with logic and questioning certain habits we all acquire. This book is an eye opener to teenagers and the younger generations on relationships and also an eye opener to adults, displaying the confusing chaos of love the youth experience in this era of modern technology where connections are abundant. In addition to being instructive, the story is extremely entertaining, funny and touches various sensitive subjects in a sensible manner, sending out plenty of positive messages.”(Amazon Review)

You can purchase the book on Amazon: https://www.amazon.com/Rules-Happy-Relationship-Shanka-Jayasinha-ebook/dp/B07WZPNDNB/ref=sr_1_2?keywords=shanka+jayasinha&qid=1568734609&sr=8-2

Shanka Jayasinha is an entrepreneur & author. Born in Monaco, he attended the University of Miami to pursue a career in professional sports. After a career-ending back injury, he focused on finance. Soon after, he founded and invested in multiple ventures from food to AI and authored two books including 10 Rules to A Happy Relationship.