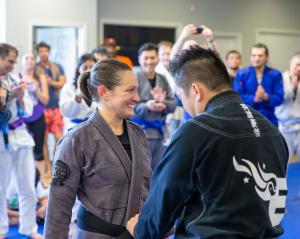 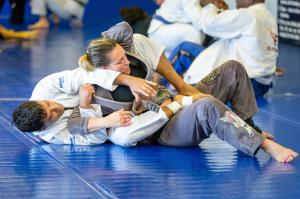 Elite MMA was established in 1993 and has quickly become one of the fastest growing and trending martial arts schools in Texas. Founded on the philosophy of teamwork, the company attributes its success to its team of many talented and caring instructors and dedicated students.

“At Elite MMA, we want our students to have access to seasoned and accomplished coaches from the variety of specialties that martial arts consists of,” says Eric Williams, founder of Elite MMA. “All of our students, staff, and instructors work very well together to form our amazing MMA family and we always enjoy welcoming new members into our community.”

Recently, Elite MMA celebrated a highly important milestone for their community, when their very first female black belt in Brazilian Jiu-Jitsu was awarded to Ashley Nguyen.

Ashley recalls that she had no idea what was in store for her 14 years ago when she first walked into Elite MMA. Having just moved to Houston for pharmacy school, she didn’t have many friends in the area, and was just looking for a workout that fit into her schedule. She started with kickboxing two days a week, and then was invited to attend the jiu-jitsu class.

“I didn’t really even know what it was,” says Ashley, “but everyone at Elite had been so nice so far that I wanted to be able to come more often. In the beginning, I really had no idea what I was doing, but it was fun because just when you think you have a technique down the next person comes and it doesn’t work again, so you are always having to learn and think and grow in a way that’s different from anything I have ever done.”

Ashley also appreciated the fact that she had a growing community around her of people who encouraged her to keep going, even when she felt she would never figure it out.

“Since I started training, I have graduated college, worked as a pharmacist, opened and sold a pharmacy, gotten married, had kids, bought a house, lost a house to flooding, bought a new house. A lot of major life events have happened, but through it all, I have had jiu-jitsu and the community of people that I train with. I have been fortunate enough to travel and train jiu-jitsu around the US and Brazil meeting friends along the way to share the journey with. So it really is more than a sport or a hobby, it’s a part of my life that has been there and grown with me.”

“BJJ is a very demanding form of martial arts that requires a great deal of physical and mental strength,” says Williams. “Attaining a black belt is not an easy feat, no matter if you are male or female, but we are so proud to see our first female student to reach her goals. This is truly a momentous occasion for our whole family.”

Individuals or families who are interested in experiencing the many benefits of martial arts are invited to contact one of the company’s four locations for a complimentary tour.

For more information about Elite MMA, to arrange a tour, or to sign up for a class, please visit https://www.elite-mma.com/.

Elite MMA prides itself on having some of the cleanest, most beautiful facilities in the country. The company has multiple locations in the greater Houston area and offers a variety of classes for men, women, and children.

Elite MMA offers programs include mixed martial arts, kickboxing, Brazilian Jiu-Jitsu, and more.
The company steadfastly follows their golden rule: “Treat others like you would like to be treated.”