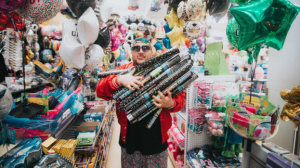 LAS VEGAS, NV, UNITED STATES, October 30, 2019 /EINPresswire.com/ — Las Vegas graffiti artist, Arman Izadi, is known for his meticulous talent and creative streak. Apart from his artistic endeavors, the businessman has all but transformed the corporate world by moving the needle for companies through his acumen in business development, innovative media and event production. Izadi has also powered some of the biggest nightclubs in the world from Hollywood to Macau.

Honing his philanthropic side, the artist has also painted his mansion to draw awareness to the 2017 Vegas shooting and to raise funds for the Boys and Girls Club in Nevada.

In May 2018, Armani Izadi decided to show off his fun side by giving his mansion a top-to-bottom makeover in tribute to Fortnite. Izadi and his team of artists from around the world worked tirelessly on the Fortnite art installation – one of the biggest in the world, documenting the entire process on the artist’s YouTube channel. Arman Izadi began the video with his signature catchphrase, but this time it was charged with a different kind of excitement.

“People keep asking me, ‘what’s the deal?’” the artist says in the video, letting out a mock evil laugh, “I’m thinking it’s a big deal.”

The project even had a Fortnite bus suspended from a hot air balloon hovering over the mansion just like in the game. As a testament to their dedication, the crew built a replica of the titled towers and held an epic Nerf battle!

The mansion itself boasted of popular Fortnite skins; Crackshot, Love Ranger, Raven, Dark Voyager, and Leviathan among others could be seen engaging in combat across the massive edifice. Arman Izadi also sprawled his socials on the installation alongside stylized lettering; “Fortnite Graffiti Mansion” “#BoogieDown” and “Battle Royale”.

Armani Izadi showed his appreciation for acclaimed internet personality and gamer Tyler Blevins “Ninja” whose rise to fame is intertwined with Fortnite. In fact, he is often considered the unofficial face of the game. The artist painted Ninja’s likeness in Fortnite combat gear among the other characters. This didn’t go unnoticed by the gamer, who gave the project a shout out to his over 7-million follower base.

“Thi is super well done,” Ninja said when reacting to the installation. “Great job, honestly, I’d love to meet you and your team someday. When I see all these amazing murals I feel like Fortnite is becoming bigger than a game. It’s awesome.”

Panda Viva Clothing partnered with the Graffiti Fortnite Mansion and announced a new line of apparel; socks, backpacks, and t-shirts were released to commemorate the project.

For Armani Izadi, the road is only just beginning. His talents have taken the social media world by storm, opening multiple doors for him and his team. Having worked with industry heavyweights like Jake and Logan Paul, Jojo Siwa and Faze Rug, the businessman has taken his business to staggering new heights.

Arman Izadi plans to use his influence to bring awareness to worthy causes and help people embrace the transformative power of art. For now, the artist is excited about several new projects in the pipeline and, as always, has his eye on the horizon for the next big adventure.