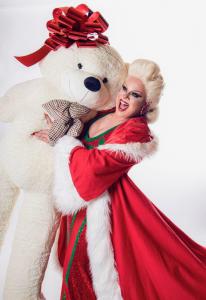 RUPAUL’S DRAG RACE ALUM NINA WEST WILL CELEBRATE “THE WEST CHRISTMAS EVER” ALONGSIDE THE NINA WEST FOUNDATION BY ISSUING $1,000 GRANTS FROM DEC 1ST TO 25TH 2019

COLUMBUS, OH, UNITED STATES, November 26, 2019 /EINPresswire.com/ — Andrew Levitt, better known as RuPaul’s Drag Race Alum Nina West, was named National Volunteer Fundraiser of the Year on Tuesday November 26th 2019 at a ceremony in Columbus, Ohio. To celebrate this momentous occasion, they are launching “The West Christmas Ever – 25 days of Christmas” in conjunction with The Nina West Foundation. The Nina West Foundation has made a point in years past to celebrate the spirit of giving during the holiday season. This year is no different. In their biggest campaign ever, they will provide daily grants of $1.000 from December 1st to 25th 2019 to LGBTQ+ organizations across the U.S. Donations will be made to organizations that have an impact on the LGBTQ+ community and its members. The organizations were chosen for the work they do every day to address LGBTQ+-specific issues, including healthcare, homelessness, trans rights, youth advocacy, veteran support, HIV and AIDS, equal rights, suicide prevention, addiction and recovery, anti-bullying, immigration, and more.

Each day, from Dec 1st to Dec 25th 2019, Nina West will announce via her Social Media channels the organizations that will benefit from the grants.

“The holiday season can be difficult for so many in the LGBTQIA community.”. Said Nina West. “With this tremendous platform given to me by RuPaul’s Drag Race, I wanted to continue to lift up and elevate my community, and what a better way to do that than to help celebrate organizations that do just that. I hope this will motivate fans of the show to give what they can- time, talent, or treasure – during the holiday season. And, if people are moved by the work of the Nina West Foundation, I hope they will consider donating to help us further our mission of equality and equal access for all. Also, all I want for Christmas is for people to register to vote! GO BIG AND BE KIND THIS HOLIDAY SEASON!”

Fans of Nina West or anyone who wishes to learn more and/or help with this initiative can donate to the Nina West Foundation at www.ninawest.com/foundation/

Nina West is an American drag queen, actor, and singer based in Columbus; Ohio played by Andrew Levitt. She rose to national prominence with her appearance on the RuPaul's Drag Race Season 11, where she placed sixth and won Miss Congeniality. She made history at the 71st Primetime Emmy Awards in Sept 2019 when she became the first ever person to walk the carpet in Full Drag while her season won 5 Primetime Emmys Awards including best Reality Competition Show. In June 2019, New York magazine named West one of the top 100 Most Powerful Drag Queens in America. On November 8th, she released her first Christmas EP, "The West Christmas Ever" featuring Disney Legend Jim Cummings which debuted at #5 on the Billboard Comedy Charts.

West has been performing in central Ohio and around the United States for the last 18 years, doing regional theater and of course, drag. As Nina West, she has produced over 35 main stage production shows. West hosts the annual "Heels of Horror" show at Axis Nightclub and has also hosted the competition "So You Think You Can Drag?. In 2008, she won the Entertainer of the Year award, and was included in Columbus Business First's "40 Under 40" list in 2018. Nina is a LGBTQ advocate and has raised over $2.5million for charitable causes in the last decade alone with her charitable foundation The Nina West Foundation. In 2019, Andrew Levitt was named Volunteer Fundraiser of the Year for National Philanthropy Day.