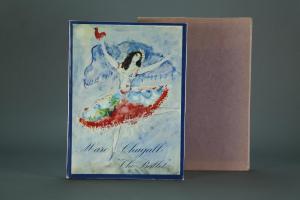 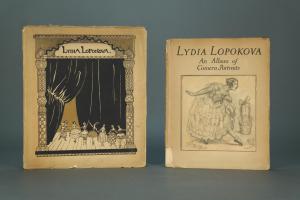 Lydia Lopokova, An Album of Camera Portraits, 1920, with The cover art by Arabella Yorke, portrait frontispiece in sanguine by Glyn Philpot, nine full-page pochoir illustrations, and a portrait by Picasso. Estimate $200-$400 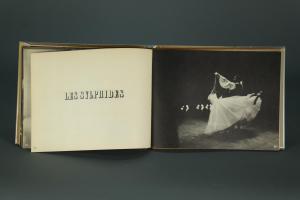 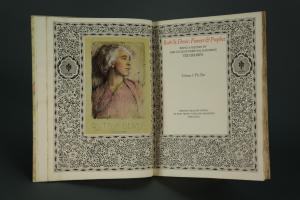 1920 two-volume set titled Ruth St Denis: Pioneer and Prophet, authored by Ted Shawn and signed by both Shawn and St Denis, co-founders of the Denishawn School of Dancing and Related Arts in Los Angeles. Estimate $200-$300 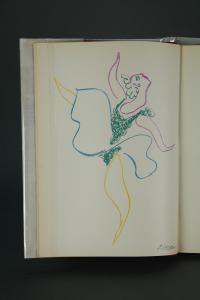 The Dance Library is a 60-year privately held assemblage of historical literature, correspondence, ephemera and illustrations pertaining to classical dance.

Leslie and Donald served as lifetime stewards to an extraordinary archive that has few peers, since much of it was amassed at a time when the field of dance literature was still in its infancy. ”
— Catherine Payling

FALLS CHURCH, VA, UNITED STATES, December 9, 2019 /EINPresswire.com/ — On Thursday, Dec. 12, Quinn’s Auction Galleries will host a single-consignor auction of the Getz-McDonagh Dance Library, a 60-year privately held assemblage of historical literature, correspondence, ephemera and illustrations pertaining to classical dance. Originally known as the Getz Dance Library, in reference to its founder Leslie Getz (1945-2019), it is also known to many in the dance community internationally as the Getz-McDonagh Dance Library. Donald McDonagh is Leslie Getz’s steadfastly supportive husband, who shared his wife’s passion for dance and took an active partnership role in the library’s growth and maintenance until the day of his wife’s passing.

Leslie Getz’s June 2, 2019 obituary in the New York Times described her as “a widely known, valued and admired member of the New York City dance community,” noting that she also created, edited and published Attitudes and Arabesques, a monthly newsletter of worldwide dance periodicals and publications.

“Leslie and Donald occupied two New York apartments belonging to Columbia University, one of them allocated entirely to the library,” said Catherine Payling, director of Quinn’s Rare Books division. “They were devoted to dance and served as lifetime stewards to an extraordinary archive that has few peers, if any, since much of it was amassed at a time when the field of dance literature was still in its infancy.”

The library’s 6,800+ books and thousands of periodicals, souvenir programs, press kits, annotated playbills and other ephemera will be offered by Quinn’s in approximately 350 auction lots. Also included is a small selection of dance illustrations.

One of the top highlights is Ballet by Alexey Brodovich, a 1945 collection of his photographs of dancers. From a small edition of 500, the book was designed with stiff cardboard “boards” that would have tended to become fragile over time. The library example is in uncommonly nice condition with its dust jacket. Estimate: $800-$1,200

Le Ballet, by Boris Kochno with Maria Luz, published in 1954 by Hachette, France, features a Matisse (French, 1869-1954) illustration of a ballerina on its binding and the bonus inclusion of a Pablo Picasso (Spanish, 1881-1973) lithograph, which is still present in the book to be auctioned. “It is unusual to find a copy of this book with the lithograph intact,” Payling observed. Estimate: $400-$600

A 1920 book titled Lydia Lopokova, An Album of Camera Portraits, is dance-focused but not expressly about ballet. The cover art is by Arabella Yorke, while the portrait frontispiece in sanguine was created by Glyn Philpot. Additionally, there are nine full-page pochoir illustrations, an interior portrait by Picasso, three decorations, and an appreciation by publisher Cyril W. Beaumont, London. Its estimate is $200-$400.

A 1935 Cyril Beaumont-authored and published book titled Michel Fokine & His Ballets is a hardcover octavo edition with gilt lettering and decoration on the spine. The book contains Fokine’s uncommonly encountered ink signature on a plate pasted onto the title page. The auction estimate is $100-$200. Beaumont, who wrote extensively about ballet, also edited the four-volume A Bibliography of the Dance Collection of Doris Niles & Serge Leslie, published 1966-1981. The set is offered at auction together with an unpublished Serge Leslie typescript about Beaumont, with tipped-in photographs and handwritten edits, contained in a three-ring binder. The lot also includes a 1998 letter from Leslie to Getz, and a photo of the three friends. Estimate: $100-$200

Two sketches of female dancers by Robert Huot, which were artist-signed and inscribed, then gifted to Donald McDonagh by the artist and his then-wife Twyla Tharp, are entered in the sale with a $160-$260 estimate. Other lots with a direct connection to legends of modern dance include a 1920 two-volume set titled Ruth St Denis: Pioneer and Prophet, authored by Ted Shawn and signed by both Shawn and St Denis. In 1915, St Denis and Shawn presciently founded the Denishawn School of Dancing and Related Arts in Los Angeles. It was the first dance academy in the United States to produce a professional dance company and included amongst its students Martha Graham, Charles Weidman and even the silent film star Louise Brooks. The two-volume set is estimated at $200-$300. Also, there are books and items of ephemera signed by Isadora Duncan, Margot Fonteyn, Alicia Markova, Maya Plisetskaya, and others.

Evidence of the warm friendships fostered within the dance and greater arts communities during the 20th century is clearly seen in the collection of 18 letters, notes and telegrams to and from Doris Niles, Serge Leslie and Sacheverell Sitwell, a noted art and music critic, and poet. The intimate archive from the 1970s/’80s also includes seven softbound books of poems by Sitwell, in a pink and purple case. Estimate: $200-$400

Also featured in the auction is an unbroken run of issues of Dance Magazine dating back to 1948; and issues of Britain’s Dancing Times dating as early as 1918. “Leslie Getz put protective wrappers around all of her books and publications, so the magazines are in beautiful, clean condition,” Payling said.

The Dec. 12, 2019 auction of the Getz-McDonagh Dance Library will commence at 6 p.m. Eastern Time. For additional information about any item in the sale, call Catherine Payling at 703-532-5632 ext. 575, or email catherine.payling@quinnsauction.com. For preview times, visit Quinn’s online at www.quinnsauction.com. The entire auction catalog may be viewed online via LiveAuctioneers.