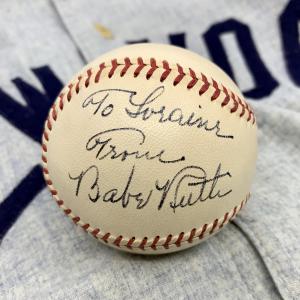 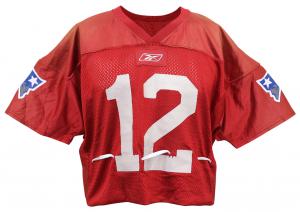 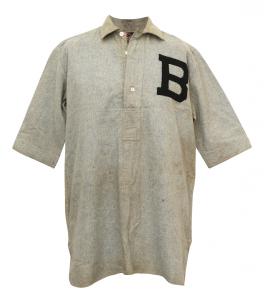 The autograph on the Babe Ruth-signed baseball in this auction is PSA/DNA-graded a MINT 10. It's the best example of Babe Ruth’s autograph we have ever seen and would be impossible to improve upon.”
— Michael Russek, Director of Operations, Grey Flannel Auctions

SCOTTSDALE, ARIZONA, USA, January 6, 2020 /EINPresswire.com/ — More than 750 lots of generously illustrated, premium-quality sports memorabilia items, including important game-used apparel and autographed material, are now available to view and bid on at Grey Flannel Auctions’ website. All major sports are represented, with an emphasis on provenance, authenticity and rarity throughout. Bidding will close on January 22, 2020.

The sale opens with an exceedingly rare 1902 Baltimore Orioles game-used jersey described by Director of Operations Michael Russek as the earliest of all professional baseball jerseys handled by Grey Flannel over its 30-year history. “It is a little-known fact that the iconic New York Yankees franchise began play in 1901 as the Baltimore Orioles, with no relation to the current Orioles organization,” Russek noted. “The team was purchased and renamed the New York Yankees in 1913. This jersey is an extraordinary relic from baseball’s most storied franchise.” The jersey is accompanied by a Photo-Match.com LOA grading the jersey a near-perfect 9+. Bidding opens at $5,000.

One of the last baseballs signed by Babe Ruth is entered as Lot 3. The Bambino’s autograph is graded a MINT 10 from PSA/DNA and would be “impossible to improve upon,” Russek said. “This is the best example of Babe Ruth’s autograph we have ever seen. It’s at the pinnacle of PSA/DNA grading.” The story behind the ball adds an endearing footnote to the mighty legend’s life story. In 1948, when his health was failing, Ruth was at a restaurant where he was approached by a waiter, asking if he would autograph a ball for his daughter's birthday. Ruth declined but later came back and asked the waiter for the girl’s name, which was “Loraine.” Ruth signed the ball, then left. He passed away the very next day. Accompanied by a full PSA/DNA LOA grading the baseball overall at NM-MT+ 8.5, and with a notarized letter detailing the story of Ruth’s signing of the ball for the waiter’s daughter, it will open for bidding at $5,000.

Lot 236 features Dale Earnhardt Sr.’s race-worn fire suit from his 1993 victory at Talladega. Regarded as the most significant driver in NASCAR history, Earnhardt was taken from the sport he loved far too early. This fire suit was originally headed to Planet Hollywood as a display and is accompanied by a Photo-Match.com LOA, a full LOA from JSA, and photos of Earnhardt signing it. Opening bid: $5,000

Lot 237 offers an incredibly rare insight into the thoughts of one of history’s greatest athletes, Muhammad Ali, with respect to a controversial event from 50 years ago. In 1969, Senator Ted Kennedy was driving a car that careened off a bridge at the eastern end of Martha’s Vineyard, killing passenger Mary Jo Kopechne. The story garnered national headlines and drew various opinions from high-profile people, including Muhammad Ali. Following the tragedy at Chappaquiddick Island, Ali personally reached out to the Kopechne family to offer his condolences, as well as his personal thoughts regarding the event. Ali’s handwritten letter to the Kopechne family details his distaste both for the Kennedys and the totality of the events that occurred. Ali wrote the letter in cursive style, with some of the excerpts including: “Get yourself a good lawyer and sue that no good son of a bitch … for everything he’s got,” and, “His intent from start to finish was a forced illicit sexual intercourse and rape of your daughter, and since the accident was based thereon, he should be prosecuted and tried for murder.” Ali signed the bottom of the letter as both Muhammad Ali and Cassius Clay. Accompanied by a Beckett LOA, the letters opens for bidding at $5,000.

Arguably the greatest quarterback of all-time, Tom Brady’s photo-matched rookie-era practice jersey is offered in Lot 349. It is likely Brady’s primary red QB jersey from his first three seasons with the Patriots, during which time he became the starter. The extensive amount of wear shows multiple-season use. An extremely rare offering from one of football’s greatest, the jersey is accompanied by a Patriots LOA and a Photo-Match.com LOA. Opening bid: $5,000

About Grey Flannel Auctions:
Grey Flannel Auctions has been the standard of the sports memorabilia industry for more than 30 years. Family owned and operated from a gallery and offices in Scottsdale, Arizona, Grey Flannel Auctions specializes in vintage game-used jerseys and high-end autographs, and has represented consignments and estates from some of the most revered athletes across the entire realm of professional sports.