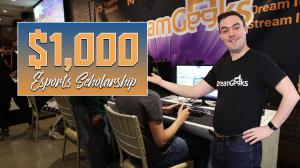 New esports scholarship announced ahead of FETC from the StreamGeeks

It’s quite an inspiration to see how all students can participate in activities surrounding the esports industry.”
— Paul William Richards

WEST CHESTER, PENNSYLVANIA, UNITED STATES, January 7, 2020 /EINPresswire.com/ — The StreamGeeks announced today a new $1,000 esports scholarship for excellence in student live streaming. The scholarship comes on the heels of the release of “Esports in Education,” a book written by StreamGeeks co-founder Paul Richards. Richards says he wrote the book to help students, parents, and educators receive the most educational value out of esports clubs, tournaments and live video productions.

The StreamGeeks Esports Scholarship is available to students producing live video content for esports or online video gaming. Students are asked to submit an essay about their experience live streaming an esports tournament or competitive gameplay online. Essay submissions are due by May 10, 2020.

StreamGeeks also hosted a 100 percent student-run esports RocketLeague tournament in New York, N.Y. in November, as part of the StreamGeeks Summit. The tournament was in partnership with the Center for Educational Innovation.

“We recently hosted a 100 percent student-run esports tournament complete with a live broadcast to Twitch,” said Richards. “The students playing competitive video games worked right alongside students operating the video production equipment used to broadcast the esports tournament. It’s quite an inspiration to see how all students can participate in activities surrounding the esports industry. We want to encourage this type of student engagement with live video production within the esports industry.”

Included with the “Esports in Education” book is a free online Udemy Course, including digital content to help students start their own esports clubs. To download a copy of the book, go to https://ptzoptics.com/esports

Students interested in applying for the StreamGeeks Esports Scholarship can learn more at https://streamgeeks.us/esports.