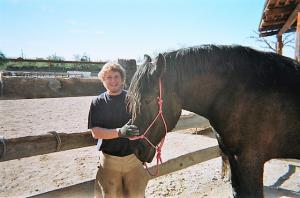 WASHINGTON, D.C., UNITED STATES, January 15, 2020 /EINPresswire.com/ — Eliot Pargament is a farrier and business owner. Presently, Eliot Pargament provides his services to those in and around Washington DC, Maryland, Virginia, and Delaware. He can be reached at (703) 727-5281, or mingusman14@gmail.com.

A horse’s feet may not be their most beautiful feature, but they are one of the most essential. Whether you’re an amateur rider or professional equestrian, Eliot Pargament, a Certified Farrier and graduate of Tucson School of Horseshoeing, advises that inspecting and cleaning a horse’s feet on at least a daily basis is crucial. One reason, he said, is it provides an opportunity to check for serious conditions like laminitis.

Laminitis is inflammation in the laminae in the horse’s foot. It can present in any feet but is most common in the front feet, and is caused by temporary or long-term disrupted blood flow. The laminae secure the coffin bone to the hoof wall. As in humans, chronic inflammation can permanently weaken the structures and the bond between the wall and bone. Untreated, Eliot Pargament warns the bone and hoof wall can separate, resulting in a displaced coffin bone which can eventually penetrate the sole. The condition is sometimes confused with founder but the two are not interchangeable. Founder is a long-term condition associated with a rotated coffin bone, while laminitis is an acute incident.

Many factors can cause laminitis, some of which are preventable and others of which are not. Eliot Pargament said some breeds, like Morgans, donkeys, and ponies, are naturally predisposed to the condition. However, you can reduce the risk. Some risk factors include high fever, severe colic, a retained placenta after foaling, bedding made with black walnut shavings, Potomac Horse Fever, various foot diseases, digestive upsets, sudden access to large amounts of lush foliage (also known as “grass founder”), blood poisoning (such as that from chemicals used to treat plants), and excessive weight-bearing on one leg. Being overweight or sustaining trauma to the foot can also cause laminitis.

When cleaning your horse’s feet, keep an eye out for potential signs of laminitis or other issues. These include warm feet or a faster-than-usual digital pulse, as well as rings in the hoof wall, bruised soles, or a widened white line. Watch for unusual behavior as well, such as an abnormal gate or the appearance of “walking on eggshells.” Watch for shifting while standing, lameness while turning or standing, or a “sawhorse” stance with the weight shifted to their hind feet and front legs outstretched.

If you suspect your horse has laminitis, call a veterinarian or certified farrier as soon as possible. Depending on the cause and severity of the condition, Eliot Pargament says treatment may include IV fluids, anti-endotoxic medications, pain medication such as NSAIDs, antibiotics, vasodilators and bedding changes for better sole support. In severe cases, the farrier or vet may recommend lidocaine patches or a catheter. Changing the shoeing can also significantly improve the horse’s comfort. Eliot Pargament is experienced in changing the shoes on laminitic horses.

Eliot Pargament has been a farrier since 2011. After graduating from the Tuscon School of Horseshoeing, he completed a training program at the “Harvard” of horseshoeing, the Kentucky Horse Shoeing School in Richmond. After apprenticing in the Washington D.C. area, Eliot Pargament started his business Metro Farrier Services. He has worked closely with an expert farrier known for his skillful handling of difficult shoeing procedures and served as an assistant instructor at the University of Maryland. Eliot Pargament has been a traveling farrier at several rodeos. He also continues his education via various training seminars and competitions around the U.S. and in Hamburg, Germany. Eliot services the Maryland, Virginia, Washington D.C., and Delaware area.