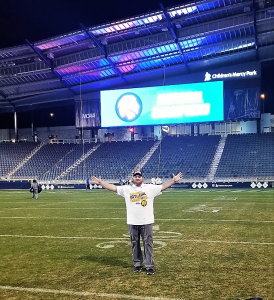 MARSHALL, TX, UNITED STATES, January 28, 2020 /EINPresswire.com/ — The 2019/20 NFL season is about to come to a climax with Superbowl LIV. But that doesn’t mean football players will hang up their shoes until spring. Athletes from New York to L.A. will be prepping for the next season. College NFL hopefuls, in particular, will be stepping up their training to prepare for spring Pro Days. Michel Andy Townsend, football coach, has mentored many star athletes over the course of his 14-plus year career, including some players who’ve gone on to play pro. He explains the importance of Pro Days.

This may sound similar to the Combine. But the two are not one and the same. Combines are typically where coaches and general managers narrow down their list of prospects. They also gather health data at this time.

For some players, who did not attend the Combine, Pro Day might be their only chance to demonstrate their aptitude on certain Combine drills. But even those who attended the Combine, which is typically a few weeks before Pro Day, should attend Pro days.

Often, recruiters already have a shortlist of prospects when Pro day comes around and use the opportunity to confirm or change the grade they gave that player earlier in the season. They’ll also gather more intel about the player. This includes not just their athletic aptitude but their personality, teamwork, and leadership abilities. Coaches are looking for players strong of mind as well as body, those who are respected by their coaches and teammates and who respect and support their teammates in return.

As all players and coaches know, only the best of the best go pro. Being an exceptional, dedicated, and well-rounded player is essential if you want to have a chance at making the cut.

Michel Andy Townsend earned his bachelor’s degree from East Texas Baptist University in kinesiology and a master’s degree from Greenville University in coaching. He’s been on the staff of two national champions: Texas A&M Commerce (2017) and Navarro Bulldogs (2010). Part of the inaugural football class at ETBU in 2000 and a 2004 graduate, Michel Andy Townsend has since held multiple titles including Associate Head Coach, Director of Football Operations, Offensive Line Coach, Defensive line Coach, and Tight Ends Coach. Michel Andy Townsend also founded the Lone Star Pro Day held at Texas A&M Commerce, which gives players from small schools an opportunity to showcase their talents to NFL personnel. Throughout the years, Michel Andy Townsend has coached multiple players who have gone on to play in the NFL, including DJ Hayden, Ethan Westbrook, Dustin Vaughan, Craig Watts, Luis Perez, and Michael Onuoha. He also designed a football camp app for Android and iPhone.