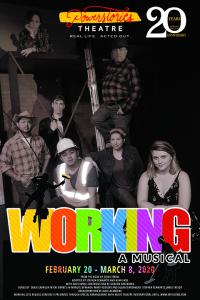 Cast of Working A Musical

It’s true stories of working people who have a dream but have to put three jobs together to make it happen. My guess is there is a monologue in Working A Musical that really hits home for somebody.”
— Fran Powers, director and Powerstories Theatre found

TAMPA, FL, USA, February 7, 2020 /EINPresswire.com/ — To commemorate their 20th year in the Tampa Bay community bringing new, authentic and often original stories based in truth, Powerstories Theatre is switching it up in 2020 with its first Broadway musical opening February 20.

In a series of monologues and songs, Working A Musical tells the relatable story of working-class men and women and compels the audience to look at the person behind the job.

Based on Studs Terkel's best-selling book of interviews with American workers, Working A Musical is a vibrant depiction of the workers often taken for granted. The homemaker, the schoolteacher, the waitress, the millworker, the mason, the trucker are just a few of the voices represented.

Despite being an award-winning theatre recognized by former First Lady Michelle Obama as the recipient of the National Arts and Humanities Youth Program Award, in its 20 years, the intimate theatre has never attempted to put on a Broadway musical.

It’s something the audience has asked for and in 2020, Powerstories Theatre founder and Working Director Fran Powers is taking the leap of faith.

She credits a member of the theatre’s artistic committee, Rachel Tew, for introducing her to the powerful musical.

“My first reaction upon reading the script is it is perfect for Powerstories. We’re about staging true stories and this is about the everyday person who has a story to tell. What could be more universal than people in the workplace? It’s something that fits our mission, new and creative. It’s true stories of working people, unconventional, blue-collar workers who have a dream but have to put three jobs together to make it happen.

“More than ever, the world needs the energy of art. It has a profound effect on all of us, moving us into a higher place of being receptive to our own hearts and minds. I think we need this right now. The cast is working towards a common goal, and there’s excitement in presenting it to an audience. There’s something special about the connectivity between the actors and the audience that’s very exciting to me. I’m having a blast directing the show.”

Powers is looking for corporations interested in synergistic sponsorships and partnerships for talkbacks after the production. She hopes that after enjoying Working, the audience gains a higher perspective of what everyone is going through.

“My guess is there will be a monologue that really hits home for somebody. I hope our show makes them feel more buoyant and light-hearted. I hope that their energy shifts a little bit of thinking twice about the person serving them eggs in the morning. I want people to understand we’re all in the together to build a life with our family and friends. I think there’s real healing in people watching theatre together. I know that’s why I do it.”

Working A Musical is February 20 – March 8 at Powerstories Theatre, 2105 West Kennedy Blvd. If a business is interested in becoming a community partner or a partner for the talkback, email Fran@powerstories.com. To purchase tickets to Working, visit www.powerstories.com.