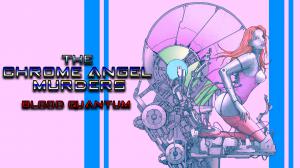 Cyberpunk Pin Up is a Perk of the Campaign. Cosplayers can be a part of the book.

Forged armor and non firing side arm is a perk as well. Turner wore real metal costumes for the live action series on Amazon Prime called The Iron Detective Anthology. 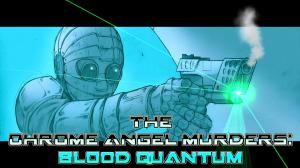 A high tech armored cop must stop a state of the art serial killer. The artwork is by Simeon Aston, and is truly beautiful.

KANSAS CITY, MO, UNITED STATES, February 20, 2020 /EINPresswire.com/ — Jason Turner is a member of the Prairie Band Potawatomi Nation, a federally recognized tribe. Launching his second comic book and following up a release on Amazon Prime, he has teamed up with Metal Made Flesh creator and cyberpunk savant Simeon Aston in a new campaign that looks techno-sexual and thought provoking as well.

Turner has struggled with being of mixed heritage for many years now and chose to tackle it in a book. "I have noticed that indigenous artists are severely overlooked in the entertainment industry. I hope to change that. In doing so, I am bringing a new chapter to a passion project I have been working on for many years. It is a Native American Cyberpunk Murder Mystery and one of a kind."

Why would they choose Kickstarter to fund this project?

"I've always joked that it's kind of like trying to be George Lucas, but with no money or studio. I have pitched the Iron Detective as a movie, a Netflix series, an anime series, even a video game. It's a huge world that I have lived in and developed for over twenty years. However, I do not have a galaxy sized fan base."

IronApe Propwryx has agreed to produce a hand raised metal armor piece and non-firing futuristic side arm for the serious collector. "If you want to cosplay, this is the only place to get the gear!" says Turner.

Across the Atlantic, Brighton UK based artist Simeon Aston has a flair for Cyberpunk meets Dark Science Fiction art. His work is freehand pencil drawings mixed with digital imaging. He is the co-creator of and lead artist for Metal Made Flesh. His art is featured regularly in Heavy Metal Magazine.

Blade Runner, Robocop, Star Wars, Akira, and The Terminator are major influences. Turner goes one step further in his fandom.

"There are some fun shout outs for like minded fans like us, but there is also some dark frightening imagery as well. It's clearly not for kids. It would be right at home with an HBO adult audience or even a anime film audience, the likes of which Ghost in the Shell or Ninja Scroll fans might enjoy. "

Simeon Aston is a bit more quiet on the outside, but has been a very positive influence on the project. He prefers to let his art do most of the talking. We do hear a bit of his smooth accent on the Youtube Channel which has many of the behind the scenes of the live action shorts for this project.

Overall, this project touches on a much larger issue that may have had these two men be at odds over a century back in time. Blood Quantum refers to a highly controversial measurement of the amount of "Indian blood" you have. It can affect your identity, your relationships and whether or not you and your children may become a recognized citizen of your tribe. Blood quantum was a system that the federal government placed onto tribes in an effort to limit their citizenship. Even today, The Indian Removal Act is still in effect.

"In our story, we combine this concept with cyberpunk tropes and transhumanism, in a detective story. I can't say that it will change the dark history of the colonization of the Americas, but it certainly will start a conversation. In these strange times, facts and actual history are more important to understanding human spirit than someone deciding how much blood matters. The only time blood quantum is used elsewhere is during animal breeding. It's pretty strange but Natives have to deal with this their entire lives. "

However, the story will also touch on high tech low life tropes in cyberpunk. It will mirror some real world things that are in the near future such as artificial body parts, computers wired into living tissue, and something that Mr Turner calls "Exonetics".

"It's a word that uses the Exoskeleton idea of Tony's Stark's Iron Man Suit and the Cybernetics of Robocop or The Terminator. Exonetics sounds cool to me. It's like have a sub dermal port below the skin, and the Iron Detective, wearing a modern day suit of armor can still have his organic parts protected. As he gets damaged, he may have full replacement augmentations."

So where do the Chrome Angels come in?

Turner describes them as "body augmentation elites". Body modifications have evolved with the times, and people will replace their organic parts with designer body modifications. For example, a night club singer has a shiny chrome arm the way perhaps a modern day singer would have an elaborate tattoo. However, these modifications are highly valued and become the source of many crimes in the city.

There are robots called the SWARM, which stands for Sex Worker Automated Recreational Mannedroid. These techno-sexual dolls are hacked and reprogrammed and commit crimes for a state of the art cyber-terrorist. They steal the Chrome Angel body parts and use them to enhance their own appearance and infiltration of the elites and eventually start real chaos.

Jason's brother Trevor Turner is writing a third graphic novel. "My younger brother has been writing some amazing stories over the years. He approached me with a concept in the Iron Detective world, and I am really excited to read what he comes up with. Once written, we want Simeon to do his cyberpunk magic. It's called The Black Freeze, and Trevor has been knee deep in the story. My brother also has an idea for a tabletop card game in this world. We are going to be busy for the next few years."

There is also some real celebrities involved in the project. Alex Harper, fashion model and cat lover, has agreed to be the Blood Queen, a sort of super spy double agent. Jason also is looking for other celebrities to be in the book. "Jessica Nigiri, Meg Turney, Salma Hayek and Antonio Banderas would fit right in. One can dream!"