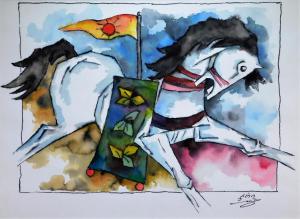 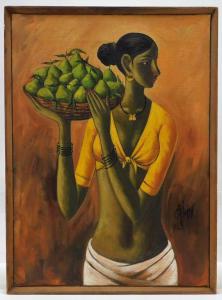 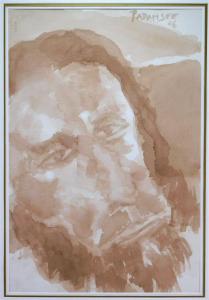 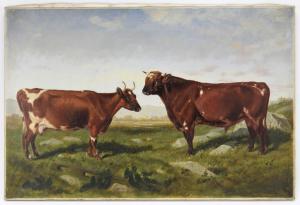 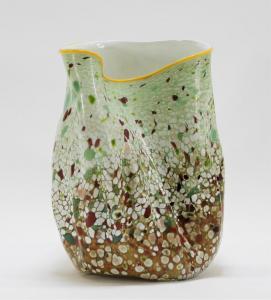 A watercolor on paper by Maqbool Hussain (1915-2011), titled Raging Horse, depicting a leaping white horse with its mouth open, was the auction's top lot.

It was a phenomenal sale. While the in-house crowd was limited, online and phone participation was more active than ever before. It was great to see the contemporary art perform as strongly as it did.”
— Kevin Bruneau

The auction was held online and in the Bruneau & Co. gallery located at 63 Fourth Avenue in Cranston. “It was a phenomenal sale,” remarked company president Kevin Bruneau. “While the in-house crowd was limited due to the virus pandemic, online and phone participation was more active than ever before. It was great to see the contemporary art perform as strongly as it did.”

The watercolor by Maqbool Hussain, titled Raging Horse, depicted a leaping white horse with its mouth open, draped with a green saddle blanket and carrying a flag with the image of a sun. The work was signed in Hindi in the lower right corner and had a sheet size of 22 inches by 30 inches, minus frame. Hussain is often referred to as the "Picasso of India."

The oil painting signed by B. Prabha, titled Woman with a Pear Basket, showed an Indian woman with her hair tied back and long limbs supporting a basket of fruit. The canvas was 22 inches by 16 inches. Prabha entered the art world when few Indian women were involved professionally, and worked on over 50 exhibitions, inside and outside of India.

The auction’s list of top earners was not limited to India. An Impressionist harbor etching by James Abbott McNeill Whistler (Mass./U.K/France,1834-1903), depicting sailing vessels out at sea, signed by the artist with a monogram in image and in pencil in the lower right margin, just 5 inches by 6 ¾ inches, rose to $8,750. Whistler painted Whistler’s Mother.

An Impressionist coastline seascape by the 19th century American artist Chas. Turner, depicting large waves crashing over a rocky coast with sailboats and seagulls in the background, changed hands for $8,125. The oil on canvas work, measuring 14 inches by 20 inches, less the frame, was artist signed and came out of a Pawtucket, R.I. collection.

A 19th century English School Realist rendering of a prize bull and heifer standing in a pasture, dated 1862, knocked down for $6,875. The animals were identified as “Ayrshire Lad” and “Miss Morton” within the image, which was 20 inches by 30 inches. The work was signed with a monogrammed “MW” and dated “July/62” in the lower left corner.

“What a thrill it was auctioneering the prize bull painting and Turner seascape,” said Travis Landry, a Bruneau & Co. specialist and auctioneer. “It’s always nice when there are a few splendid surprises. The market proved strong during uneasy times. It truly was a great day.”

Following are additional highlights from the auction. Internet bidding was facilitated by bidLIVE.Bruneauandco.com, LiveAuctioneers.com, Bidsquare.com and Invaluable.com, and the mobile app ‘Bruneau & Co.’ on iTunes and GooglePlay. All prices include the buyer’s premium.

A large Macchia art glass vase by the renowned American glass sculptor Dale Chihuly (b. 1941), organic folded form with earth tone brown and green splatter over a cream ground with yellow rim, 12 ¾ inches in height, went for $6,250. The vase was signed and dated "Chihuly 1982" on the bottom. Chihuly is well known for his extravagant glass sculptures displayed in the Museum of Fine Arts, Boston, and at Chihuly Garden and Glass, Seattle.

A contemporary watercolor on paper portrait painting by Akbar Padamsee (Indian,1928-2020), depicting the face of a somber gentleman in soft sepia tones, commanded $6,250. The 22 inch by 15 inch (sheet) work was signed and dated "Padamsee 06" in the upper right corner. Padamsee was known for painting, film making, sculpture, photography and printmaking and is considered today to be one of the pioneers in modern Indian painting.

Bruneau & Co. Auctioneers has two auctions coming fast on the heels of this one. The first is an online-only camera extravaganza sale slated for Saturday, March 28th, with bidding on several platforms. 600-plus vintage camera lots will be sold to the highest bidder without reserve. An originally planned live-only pre-sale event will be rescheduled later as a stand-alone auction.

Then, on Saturday, April 4th, a Spring Comic Book & Toy Auction will be held, by Bruneau & Co. Auctioneers, Altered Reality Entertainment and Travis Landry, Bruneau & Co.’s Director of Pop Culture, starting at 11 am Eastern time, live in the gallery and online. Featured will be comic books and a great collection of tin key-wind, friction and battery-op Japanese robots and tin toys.

To learn more about Bruneau & Co. Auctioneers and the firm’s calendar of upcoming events, please visit www.bruneauandco.com. Updates are posted frequently. To contact the company via e-mail, use info@bruneauandco.com. Or, you can phone them at (401) 533-9980.