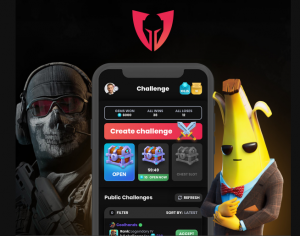 As a $70B global market, mobile gaming is approximately as big as both console and PC gaming combined and is growing rapidly.”
— Carnivore, Inc.

SAN FRANCISCO, CALIFORNIA, UNITED STATES, April 27, 2020 /EINPresswire.com/ — Carnivore Inc, the team that delivered the first professional clan management application for mobile gaming, is working to further redefine gaming with the Release of Rival (www.Rival1v1.com). Rival allows players to battle head to head against other players in games such as Call of Duty, Fortnite, Clash Royale, PUBG, and 50+ more. Each gaming instance allows users to wager, using gems, on their chances as winning the contest with their fellow players.

This was initially explored with ClanHQ, the world’s best clan management application, but is being massively expanded with Rival. This massive market presents unique challenges to traditional video game developers and marketers. Unlike the PC and console-based models, revenues within mobile gaming are traditionally overwhelmingly driven by the free-to-play business model. As such, the revenue in mobile is driven by an incredibly small segment of users – 3% of players ever pay, 1% drive 80% of the revenue and an incredible .19% drive half of the topline. The competition for these gamers is intense. To get a new game into the top-25, you’d better have at least $50M to spend on performance marketing – and the top games spend much, much more.

At the same time, the industry is evolving quickly. First, developers learned the power of group play in mobile gaming. Many of the highest revenue generating games have learned that if gamers are playing because they are working as a team and counting on each other vs. just leveling up themselves they play more often, longer, spend more money – all key metrics go up. The investment in clan-based play greatly increased, and in that model, games with relatively smaller player bases (and even smaller payer bases) were king. But that’s changing.

Newer games that have launched over the last few years have been rising quickly up the charts, often supporting cross-platform play. Games such as Fortnite (250M total WW users), PUBG (had 50M PC installs which increased by 600M! when they launched mobile), and most recently, Call of Duty Mobile (100M installs just a week after launch, currently 150M) have been dominating installs, opening mobile to an entirely new segment of highly engaged gamers.

Enter Rival. A wagering and competition platform built specifically for these gamers. Through Rival, a player can join with friends (and enemies) to compete and wager against one another. Our robust chat system allows users to connect, chat, and wager with one another, either in competitive 1v1 play, or eventually to place wagers on the outcomes of other friends’ games. It also allows users to play for both cash and bragging rights, with Rival’s 1v1 esports league, open to all, which will run on a monthly basis. As more and more players begin to play mobile games from home, Rival steps up to help raise the stakes and make their mobile gaming more interesting. Rival is completely free to use and incorporates chatting, a unique matchmaking system, and uses AI to determine match results.

More information on Rival can be found at www.rival1v1.com, and the application itself can be downloaded from the App Store. While it is currently only available for Apple, an Android version is currently under production.