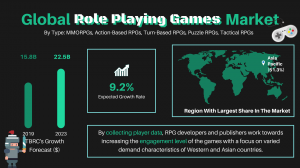 LONDON, GREATER LONDON, UK, May 1, 2020 /EINPresswire.com/ — The global role-playing games market is expected to grow at a rate of about 9.22% to nearly $22,471.3 million by 2023. Going forward, the increasing use of internet, technically advanced platforms, and increasing gamer’s involvement will drive the growth. Factors that could hinder the growth of the role-playing games market in the future include regulatory restrictions to curb RPG games addiction, high cost and system compatibility, and supply chain disruption due to the impact of COVID-19.

The global role-playing games market is further segmented based on type and geography.

Read More On The Report For The Global Role Playing Games Market At:

Companies are increasingly collecting player data to enhance the RPG games and gaming experiences. RPGs developers and publishers mainly work towards increasing the engagement level of the games with a focus on varied demand characteristics of Western and Asian countries. This is done by collecting and performing data analytics on the users’ behavioral data such as the time spent on the game (per user), the devices used, regional, national and international players on the game, players’ interaction with the game and platform such as quitting points insights from social elements, their preference of cross-platform play, peak times of use, game server response times, in-game purchases, and each user’s personal data. The data is used by the RPGs developers and publishers to tailor the advertisements and brand integration activities. Companies implementing data analytics to customize their games and in-game activities include Electronic Arts, Zynga and Microsoft.

Where To Learn More

Sourcing and Referencing: Data and analysis throughout the report are sourced using end notes.

Strategies For Participants In The Role Playing Games Industry: The report explains a number of strategies for companies in the role playing games market, based on industry trends and company analysis.

Opportunities For Companies In The Role Playing Games Sector: The report reveals where the global role playing games industry will put on most $ sales up to 2023.

Interested to know more about The Business Research Company?

The Business Research Company has published over 1000 industry reports, covering over 2500 market segments and 60 geographies. The reports draw on 150,000 datasets, extensive secondary research, and exclusive insights from interviews with industry leaders. The reports are updated with a detailed analysis of the impact of COVID-19 on various markets. Here is a list of reports from The Business Research Company similar to the Role Playing Games Global Market Report 2020: