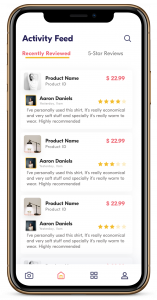 TruRevU allows users to shop for products securely and read reviews they know are from other consumers, not paid actors.

With TruRevU, consumers can feel confident that the reviews they are reading are from other consumers, not paid actors. A five star review on TruRevU will really mean something….”
— Peter Russeau

SAN FRANCISCO, CALIFORNIA, USA, May 20, 2020 /EINPresswire.com/ — When it comes to most product review sites and apps, there is one persistent issue that definitely knocks them down a few stars – fake reviews.

Because product reviews can be left by anyone, companies and marketing agencies can fill their products with fake reviews from employees or bots masquerading as satisfied customers. It was this issue that led PRIZM Services President Peter Rousseau to create TruRevU, an app that makes fake reviews a thing of the past.

“With TruRevU, a user has to scan the UPC code of the product they are trying to review before they review it,” says Rousseau. “That means when someone looks up a product on TruRevU, they can be confident that every one of those reviews was made by a real person who actually purchased our product.”

TruRevU is now available on the App Store and the Play Store. The app (designed by Integral App Studio) is powered by an “authenticity engine” that only accepts reviews from reviewers that can prove that they purchased the product in question. The app identifies fake reviews and deletes them automatically. Users simply place the product underneath their phone’s camera, and the app’s easy-to-use barcode scanner reads barcodes and QR codes, instantly validating their reviews.

TruRevU allows consumers to read authentic third-party independent reviews with the confidence that they aren’t being bamboozled by companies or marketing agencies. In addition to making sure that the user has purchased the product before authorizing their reviews, TruRevU makes sure that each user may only leave one review per product, ensuring that one person can’t flood a product with multiple positive or negative reviews.

“We wanted to restore authenticity to the product review process,” says Rousseau. “With TruRevU, consumers can feel confident that the reviews they are reading are from other consumers, not paid actors. A five star review on TruRevU will really mean something – both to consumers and to companies who want their products to be thought of as high quality.”

Peter Rousseau is available for interviews about TruRevU. To schedule an interview, contact TruRevU at contact@trytrurevu.com.