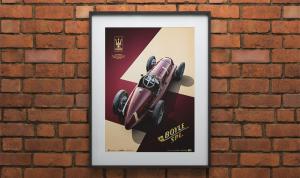 But one of the Italian marque’s least known and most successful race cars was the 8CTF, a stunning single-seater built for Grand Prix racing in 1938, which enjoyed its greatest successes once it had crossed the Atlantic, changed its name to the Boyle Special and won the Indianapolis 500 Mile race, not just once, but twice in 1939 and 1940. The Boyle Special, named after team owner Michael Boyle is officially the most successful car ever to have raced at the “Brickyard” with those two wins, plus two third place finishes and a fourth. It has been lovingly restored and is on display in the Indianapolis Hall of Fame Museum and is now immortalised in a beautiful Automobilist poster, created in collaboration with Maserati, available in limited edition to commemorate the grand win on May 30, 1940 at Indy 500 – a win that ensured this beauty would go down in history. This is also the first commemorative poster in a series of collaborative efforts between Maserati and Automobilist, which will capture the glorious history and heritage of the Italian manufacturer, leading up to sneak-peaks into their cars of the future, all captured in high-quality creative prints that bring moments to life.

The 8CTF featured on the post had an amazing career, and became one of the longest and most glorious of any single-seater racer, and continued till 1950. One of the three cars built, chassis number 3032 in which Wilbur Shaw triumphed at both the 1939 and 1940 Indianapolis 500, continues to be on display at the Indianapolis Speedway Museum. At Automobilist, Every last detail of the car, including the wear and tear it has endured through the race, the fittings on the steering, and the exact shade of metallic colour have been recreated using images from that period.