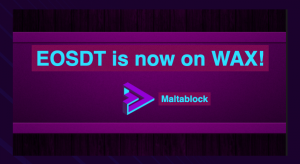 EOSDT is now on WAX

EOSDT – a stable coin is now available on WAX blockchain!

This is the dawn of a new era of DeFi on WAX. Phoenix is a platform on WAX which showcases the full potential of the DAPP Network. WEOSDT will be the primary means of interacting with the Phoenix.”
— Michael Gucci

This is an important milestone and will usher in the era of DeFi on WAX blockchain.
This project is the result of a collaboration between Malta Block, EOSphere and Aloha EOS. We also want to thank Alex Melikhov and Pablo Gabril from Equilibrium, Syed Jafri from EOS Cafe Block, Denis Carrière from EOS Nation and Evan Vandenberg and TM from the WAX team.

It is now possible to send EOSDT from EOS blockchain to WAX blockchain and vice versa. EOSDT is able to move back and forth between EOS and WAX on an IBC bridge built based on an improved version of ZOS – IBC architecture developed by Malta Block.
The new improved version of ZOS – IBC architecture does not depend on dfuse. It only requires a standard nodeos node and does not require any advanced history plugins.

Complete details on how this works is available here:
https://medium.com/@maltablock/eosdt-is-now-available-on-wax-4a6ab694b427

We could have stopped at building the EOSDT – WAX IBC bridge. At Malta Block, we are always thinking about improving user experience and making users feel comfortable with adoption. We felt that people using WEOSDT on dapps on WAX do not necessarily want to go to EOS, buy EOSDT and then transfer that to WAX.
That is why we now offer a swap contract on WAX that allows users to buy WEOSDT on WAX without the need of a cross chain transfer.

This is made possible with a WEOSDT – WAX swap contract at weosdtwaxswp. This swap contract is based on sx.swap developed by Denis Carrière from EOS Nation. We have modified the contract by adding a circuit breaker which utilizes a custom price feed that we have developed.

We are excited about the future with the availability of EOSDT on WAX. We hope this is the dawn of a new era of DeFi on WAX.

Phoenix is a platform on WAX which showcases the full potential of the DAPP Network. WEOSDT will be the primary means of interacting with the Phoenix platform on WAX. The possibilities and opportunities that are now attainable with a stablecoin on WAX are immense.

This will also greatly help traders and collectors as all the GPK cards and all other upcoming NFTs can now be listed in terms of EOSDT. Removing the volatility of WAX price will simplify the decision making process as everyone can understand what they are paying for the NFTs in terms of a stablecoin. But of course, we are just scratching the surface of this immense opportunity.

About Malta Block
Malta Block is a guild on the WAX blockchain. In addition to maintaining a top-notch block production infrastructure, we offer a wide range of services – from token smart contract design and creation, to managing the resources needed for an airdrop such as RAM and CPU, as well as taking care of all the details that go into conducting a successful airdrop.
Malta Block also offers services as a DAPP Service Provider (DSP) on WAX.