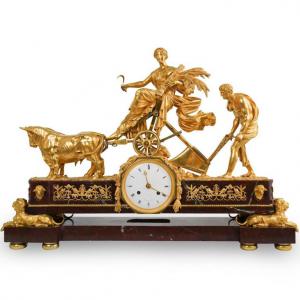 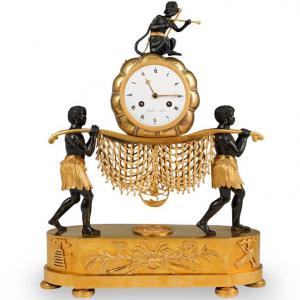 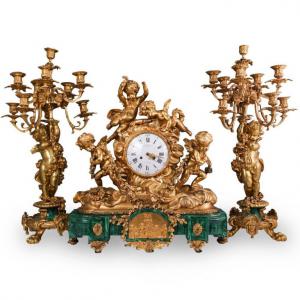 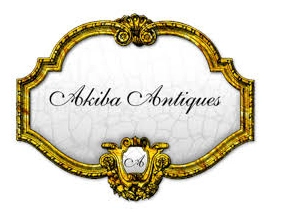 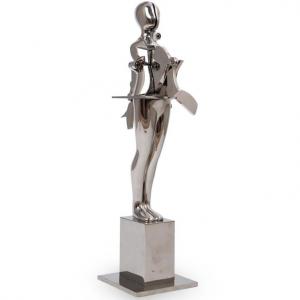 A selection of mantel clocks from the French Empire by Akiba Antiques on August 4th, written by Auction Daily

EDGEATER, NEW JERSEY, UNITED STATES, July 28, 2020 /EINPresswire.com/ — Leading the catalog of Akiba Antiques’ August 4th Eclectic Collection of Estates Worldwide event is a selection of mantel clocks from the French Empire. The French Empire-style clocks (USD 65,000 – $95,000) were created in the early 19th century. A piece offered in the auction, made of gilt bronze and red griotte marble shows a woman carrying sheaves of wheat, visually balanced on either side by a farmer and an ox harvesting a field. It has a white enamel dial below the central figure, a detailed bezel, and ormolu animals on the front. The clock’s distinct style can be traced to the rise of Napoleon Bonaparte, who prompted a French design trend favoring elaborate and gilded decoration.

A mantel clock ($30,000 – $60,000) attributed to Louis-Isidore Choiselat, a Parisian bronze caster, is also included in the auction. It shows two boys carrying the dial on a bale of cotton. A chained monkey perches on top while netting hangs in the space between the figures. Another clock emphasizes the classical motifs popular during the 19th century, showing Cupid and Psyche leaning on a pedestal ($20,000 – $30,000). Based on the Greek and Roman myth surrounding the god of love, the couple is shown examining a gilt butterfly in Cupid’s hands. A 20th-century clock ($15,000 – $25,000) depicts a group of cherubs carrying absinthe vines.

The Estates Worldwide sale might also attract Ernest Trova collectors. Table Man, offered in the sale, is a variant of Trova’s Falling Man series, which he called “man at his most imperfect.” It is a stainless-steel sculpture by the American artist with an estimate of $10,000 to $15,000. Executed in 1979, this piece comes from an edition of eight. Flowing Man ($6,000 – $12,000), which shows Trova’s signature figure taking a step forward, is also available. The shape of the figure flows out behind him in a diminishing triangle.

This auction also boasts mantel clocks in popular styles across centuries and national boundaries. A Lalique France glass mantel clock ($300 – $600) with tall flower designs will be offered alongside a German Gothic Revival clock ($500 – $1,500). The latter has a mahogany wood frame and gilt bronze decorations.

Additional highlights crossing the auction block include a notable pair of Chinese huanghuali wood chairs ($8,000 – $12,000). A variant of rosewood, huanghuali is hailed for its translucent sheen and unusual patterns. Openwork dragon motifs decorate the backs of the available chairs. Collectors of Chinese art can also consider a palace-sized carved jade boulder showing village scenes and buddhas ($2,500 – $5,000).

Akiba Antiques was founded in the 1980s in Paris by Charles and Franceska Akiba. They have a joint collecting and selling experience in French furniture and European art. The couple eventually moved to the United States and settled in Dania Beach, Florida, where the auction house continues to host regular sales both live and online.

Bidding for these items will begin at 4:00 PM EDT on Tuesday, August 4th, 2020 at Dania Beach, Florida. Over 530 lots that include decorative art, jewelry, fine art, and Asian art, will be offered. Visit LiveAuctioneers to place an online bid and the Akiba Antiques website for more information.