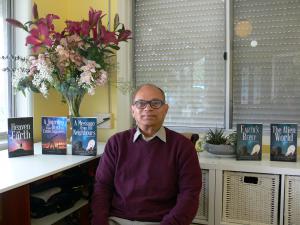 Author Vincent Hyde with his 5 Books 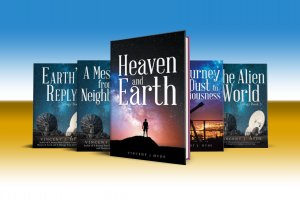 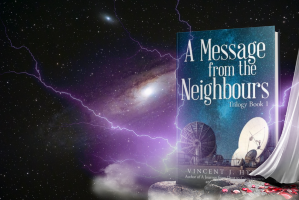 A Message from the Neighbours Book 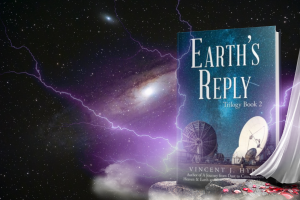 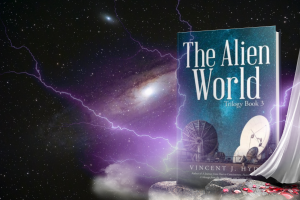 Inspired by the manner in which the dust followed rules to be transformed into galaxies, stars, planets and moons in Heaven and how human beings followed rules in the ields of Knowledge”
— Vincent Hyde

AUSTRALIA, September 10, 2020 /INPresswire.com/ — Vincent Hyde takes readers on a journey across the infinite with his series of books. rom the formation of the cosmos, the emergence of human consciousness, to encounters with alien civilizations in the Andromeda galaxy, Hyde has everything sci-fi aficionados could want. Prepare to go far and delve deep into a variety of profound subjects including the links between Mind and Matter, courtesy of his imaginative vision.

In "Heaven and arth" readers will see how the rules of both resulted in the creation of galaxies, stars, planets and moons across the heavens as well as the development of consciousness on arth. With "A Journey from Dust to Consciousness" he tracks the development of matter and life, how the rules governing the elements and the smallest of particles led to the emergence of increasingly sophisticated states of being until life evolved, became conscious, created machines and great cities. In these two books, Hyde delves into the nature of existence and the fabric of reality, the matter that makes up everything – which is all the same despite composing stars and people alike.

Hyde also shares his epic sci-fi trilogy. It begins with "A Message from the Neighbors" when humanity receives a signal from what is presumed to be a technologically advanced civilization from Andromeda, a galaxy neighboring the Milky Way. The second book details "arth's Reply" to this cryptic paradigm shifting occurrence brought to them courtesy by a visitor from beyond who brought the previous message. Then, in the final act, Hyde takes his readers to "The Alien World," where after some time humanity has created a civilization capable of projecting consciousness across the galaxy and beyond. At this point, advanced artificial intelligences, robots, are inspired to plan, design and build the titular planet on the outskirts of Andromeda to take consciousness to a new galaxy.

Hyde explores countless possibilities in a way that only science-fiction authors can, by posing questions and suggesting answers radically different from what conventions would expect. Because science-fiction stories, whether they accurately predict the future or make eerie projections based on current trends and human history, are about disrupting the norms that have been taken for granted. Science fiction at its best is exploratory. While some say it delves into the unknown, perhaps those depths have just been forgotten, containing things that have always been known but shunned by those who would rather look away or forget. So like all storytelling, despite the “fiction” in its name, the S genre is here to remind readers of these truths – buried in the depths or hidden in the blackness of space.

Vincent J. Hyde was born in September 1954 in Calcutta, India and later migrated to Sydney, Australia in ebruary 1970. There he completed his secondary education and attained an lectrical ngineering degree at the University of New South Wales in 1979, and completed a postgraduate diploma in Illumination Design at the University of Sydney in 1983. Hyde worked as an electrical engineer at the New South Wales Public Works from 1979 to 2014 and retired in 2014. Since then he has been writing to continue his professional development.