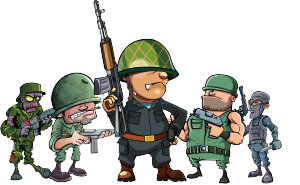 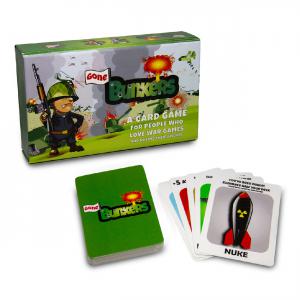 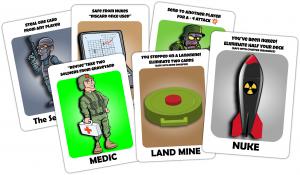 Gone Bunkers started when I was searching for a new strategy game but couldn't quite find what I was looking for, so I decided to craft my own”
— Gone Bunkers creator Austin Burke

Gone Bunkers was created by Austin Burke, a board game enthusiast living in California. Austin felt compelled to make his own strategy card game after he found himself dissatisfied with most games on the market. He used his previous experience in developing card games to establish the rules, characters, and prototypes of Gone Bunkers. After successfully testing the game out with family and friends, he decided to take his game to Kickstarter.

Gone Bunkers is a war game, strategy game, and card game, all in one. Players must collect troops cards, as well as offense and defense cards, to begin crafting a strategy against the war cards spread throughout the deck. Players can also attack each other along the way using land mine, spy, and nuke cards. The rules of the game, which are included with the cards, are straightforward, allowing younger members of the family to participate too.

What separates Gone Bunkers from other war-based strategy games is its out-of-the-box science fiction elements. Included in the 88-card deck are multiple spy, landmine, nuke, and zombie cards, which can be used against other players. There's also special mine sweeper, countermeasures and other defense cards that can support the player's troops throughout the game. The variety of cards ensures that every game will be a new, challenging, and overall enjoyable experience.

There are two reward tiers available for those interested in being the first to play Gone Bunkers with their friends and family. For a pledge of at least $20, the contributor will get one copy of Gone Bunkers. Those who'd like to purchase multiple decks can save over $200 by contributing to the $300 tier. This tier comes with two Gone Bunkers game decks and a high-quality Gone Bunkers ammo box, which can be used to store the cards.

If certain stretch goals are met, additional rewards like sticker packs and figurines will be included with both tiers for no extra charge. Gone Bunkers rewards ship all over the world, with estimated delivery in February 2021.