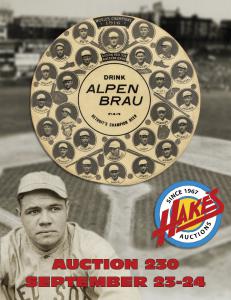 Dr. Paul Muchinsky considered the 1916 World Series button to be the centerpiece and most valuable item in his collection. There is simply no other baseball button to which this one can be compared.”
— Alex Winter, President of Hake's Auctions

YORK, PENNSYLVANIA, UNITED STATES, September 20, 2020 /EINPresswire.com/ — The legend of Babe Ruth, the historical importance of the Paul Muchinsky (1947-2015) pinback button collection, and the mystery of why a Detroit brewery would promote the 1916 World Series Champion Boston Red Sox form an intriguing backstory that continues to unfold at Hake’s Auctions.

The puzzle surrounds the prized headliner of Hake’s 2,048-lot collectibles and pop culture sale that closes for bidding on September 23-24: a 6-inch celluloid button deemed so important, experts believe it could set a new world auction record for a baseball pinback. It has the distinction of being the only 1916 World Series Championship button known to exist.

The 1916 Series was especially significant for Babe Ruth, as it marked the brilliant southpaw’s first post-season on the mound. He revealed his incredible prowess by pitching a complete extra-innings (14 innings) game against the Brooklyn Robins, delivering a 2-1 second-game victory for the Sox.

The central advertising message appearing on the pinback in Hake’s auction raises intriguing questions about the button’s origin and intended use. Within a black-outlined circle in capital letters, it says “DRINK ALPEN BRAU – DETROIT’S CHAMPION BEER.” But why would a Detroit brewery support a rival team from Boston? Or put the other way, why, hypothetically, would a Boston team approach a Detroit brewery for an endorsement deal? Pundits can’t help but speculate that America’s tensions over World War I – which the United States joined almost exactly six months after the 1916 World Series was played – might have had something to do with it. It’s possible that economic opportunities were diminished at the time and the Sox were open to an additional revenue source from out of state. Or it could have been something as simple as the brewery owner being a Red Sox fan or possibly a Boston native.

Hake’s president, Alex Winter, thinks the button’s size suggests it may have been a sample made to illustrate a presentation to the brewery. “It’s the largest baseball button that had ever been made up to its time. It’s possible it was produced in a larger size to maximize the detail, which is important because there are images of the players and manager.”

Most serious collectors of baseball buttons would know of the legendary 1916 button because it is pictured on the back cover of the late Dr. Paul Muchinsky’s 2004 mega-reference book 'Baseball Pinback Buttons.' Muchinsky retained personal ownership of the button, even when failing health led him to sell roughly 85% of his collection at auction. The button was considered such a valuable asset, it was actually placed in a trust and not to be sold until 2037. Recently Muchinsky’s family updated that decision, and the button is now being offered by Hake’s with an opening bid of $10,000. (n.b. As of the time of this press announcement’s dispatch, the leading bid is already at $25,000.)

“Dr. Muchinsky considered the 1916 Red Sox button to be the centerpiece and most valuable item in his collection. It was his pride and joy,” Winter said. “Untypically, we have left the estimate open, as there is simply no other button to which this one can be compared."

Winter cited market-price trends for other types of early Babe Ruth mementos. “Even low- to mid-grade examples of Ruth’s M101-5/4 ‘Sporting News’ rookie cards – likely more than 100 exist in various grades – routinely fetch six-figure prices at public auction, with high-grade examples approaching seven figures. Ruth’s first-ever baseball card, produced in 1914 as part of a ‘Baltimore News’ minor league issue, would surely command a seven-figure auction price. There are roughly 10 to 12 of those in existence. In addition, the few known Boston Red Sox team postcards from this same era have brought prices approaching $100,000 in recent years. For those reasons, we can only speculate what collectors might be willing to pay for the only known 1916 World Series Champion Boston Red Sox team button with images of Babe Ruth and his teammates. It is not an overstatement to say that this will be a once-in-a-lifetime opportunity to acquire a baseball treasure of immeasurable importance.”