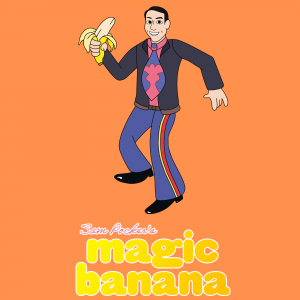 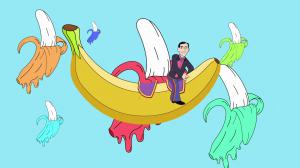 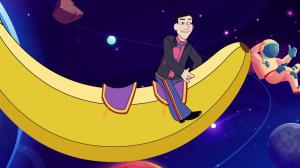 My "Magic Banana" blasts off on September 25th and I'm so excited to share it with you!”
— Sam Pocker

LOS ANGELES, CA, USA, September 21, 2020 /EINPresswire.com/ — Award-winning author, filmmaker, and musician, Sam Pocker reveals his out-of-this-world single “Magic Banana” set for release on September 25. Alongside the single comes an official animated music video for “Magic Banana,” cleverly executed and animated by Nick Van Dyk (Volbeat, Marshmello). Inspired by a desire to get out of his head and into outer space, the song and video is Pocker’s light hearted effort and authentically creative product of its time, pushing creative limitations in the face of global isolation.

Covering all the components that actually make up a banana’s chemistry, Pocker does a nice job delivering both delight to the eyes, ears, and the mouth, quite literally. There is an actual limited edition fruit snack called “Sam Pocker’s Magic Banana” which launches in celebration alongside the video release and can be purchased at http://bananas.today

The song was produced by Paul Kostabi (White Zombie, Psychotica), and mastered at Abbey Road Studios in London by Geoff Pesche (New Order, Kylie Minogue). Going on to share, “Things haven’t been so fun on Earth lately so I thought I might jump on a magic banana and fly around outer space instead,” says Pocker.

Escape to Sam Pocker’s Magic Banana Factory, a colorful journey through time and space. The song will be officially released on September 25,2020 across all major DSP stores, including pre-purchase on Bandcamp.

About Sam Pocker
Sam Pocker is an award-winning author, filmmaker, and musician. Pocker’s songwriting catalog covers over 8 albums worth of material, released by his bands The Pretty Colors, The Pregnant Vegans, and The Agoura Hills PTA. He has worked with producers such as Geza X (Black Flag, Dead Kennedys), Paul Kostabi (White Zombie, Psychotica), Mark Nevers (Lambchop, Silver Jews), and Michael Eisenstein (Letters To Cleo, Beck). His work has been featured in The Wall Street Journal, NPR, Redbook, US News & World Report, Publisher’s Weekly, WPIX 11 News, Everyday With Rachael Ray, The New York Daily News, SiriusXM Radio, New York Magazine, and countless other media outlets. His most recent book “Where Do Incorrect Ideas Come From?” was released in January 2020. In March his new single “Can’t Stop Thinking About Me” premiered with a music video that is a meticulous frame-by-frame recreation of the video for “Everybody Have Fun Tonight” by Wang Chung shot entirely in his living room.

Sam Pocker
Sam Pocker Is An Artist In Los Angeles California
+15072255726
email us here
Visit us on social media:
Facebook