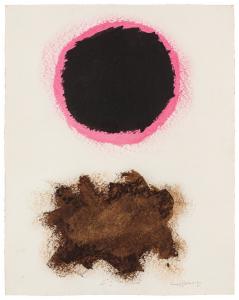 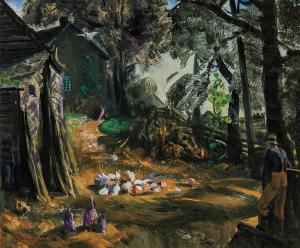 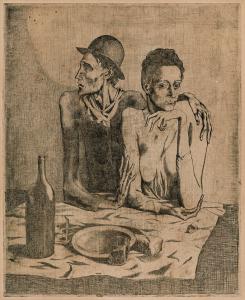 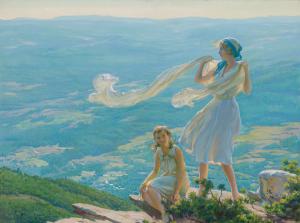 Leading the auction was the highly-anticipated sale of Abstract Expressionist art from the Jeanne and Carroll Berry Collection. The results did not disappoint.

The long-anticipated Berry Collection finally came to fruition as well as many other works we have been holding since April. We had strong results across the board and have many happy consignors.”
— Sandra Germain

Leading the auction was the highly-anticipated sale of Abstract Expressionist art from the Jeanne and Carroll Berry Collection. The results did not disappoint and listeners could feel the competition as auctioneer Peter Coccoluto fielded bids from the phones. Leading the group was Adolph Gottlieb’s Untitled #30 from 1970 that sold for $162,500, exceeding its presale estimate. Two lots later, Jackson Pollock’s Untitled from 1952-1956 sold for $112,500. Overall, 11 of the 22 lots hammered down above their pre-sale high estimates, a testament to the quality of the works offered.

Other notable sales from the Berry Collection include Mark Rothko’s Untitled from 1968 that sold for $78,000 and a pair of Hedda Sterne drawings that set a new record at $13,750. Sterne is the only female painter in the Irascibles and competition for her work was aggressive. Harry Weldon Kees, whose work has never before been offered at auction, sold for $8,750. And, the cover lot, a work on paper by Richard Pousette-Dart, sold for $37,500.

An Abstract Expressionist painting by Michael (Corinne) West from a separate collection sold for $52,500. West, a female artist, chose a masculine name to remove the bias of gender in the interpretation and sales of her work.

There was success in all categories at Shannon’s and there were no dull moments during the nearly four-hour auction. Sandra Germain, managing partner, commented “We are thrilled with the results of the sale. The long-anticipated offering of the Berry Collection finally came to fruition as well as many other works we have been holding since April. We had strong results across the board and have many happy consignors.”

A George Bellows painting from his time in Woodstock sold for $106,250 after enthusiastic bidding from five phone bidders. Charles Burchfield’s Steel Mill Homes sold for $75,000 to the Muskegon Museum of Art in Muskegon, Michigan. Charles Ethan Porter’s Peonies led the 19th century American Art category, selling to a California institution for $55,000.

Notable sales in European art include Montague Dawson’s yachting scene, The Needles, that sold for $93,750; and a Hugues Merle, Young Woman in Blue, that sold for $50,000. Modern European art did well with a Kurt Schwitter’s collage from his Merz series selling for $50,000; a Jean Dufy of Les Champs-Elysees that sold for $57,500; and a Marie Laurencin, Jeune Femme, that tripled the low estimate selling for $45,000 with international bidder participation. A painting by contemporary British artist Patrick Hughes found a new home on the West Coast for $45,000.

American Impressionism was led by Charles Courtney Curran’s Wind on the Cliff, a sweeping view from a cliff with two young women, probably the artist’s daughter and a family friend, that sold for $100,000. Other highlights in this category include Woman in a Silk Robe by Frederick Carl Frieseke, which sold for $57,500; and Guy Carlton Wiggins’ Winter at the Library that also sold for $57,500.

A regionalist work by Thomas Hart Benton of the Louisiana rice fields, Threshing Rice, sold for $87,500. Winter Stream by Southwestern artist Victor Higgins quadrupled the low estimate selling for $40,000 to a buyer in New Mexico. There were three paintings by New England artist Eric Sloane, led by Last Hay of the Season, a large 24 inch by 36 inch painting that sold for $47,500.

Prints were led by Picasso’s Le Repas Frugal, one of the artist’s first print compositions, that sold for $100,000. A Robert Rauschenberg silkscreen with iconic figures from the 1960s, Signs, sold for $27,500, while a group of prints commissioned for the Jimmy Carter inauguration fund sold for $30,000 to a museum collection.