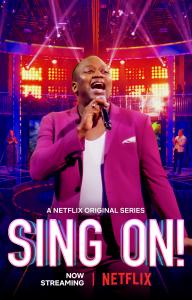 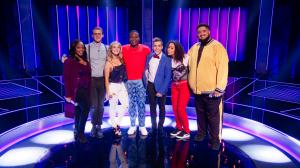 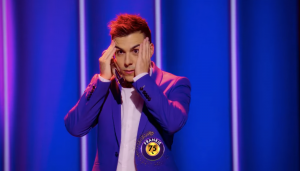 Frankie anxiously awaits the results of the round

Frankie Cena uses an impressive combination of perfect pitch and gameshow strategy to win the jackpot on Netflix's newest original series – Sing On!

VANCOUVER, BC, CANADA, September 29, 2020 /EINPresswire.com/ — Vancouver, British Columbia, September 16, 2020 – Upcoming singer and entertainer,
Frankie Cena makes his Netflix debut on the new karaoke competition series, Sing On!
hosted by Tituss Burgess. Not only does Cena appear as the sole Canadian contestant
on the 7th episode of Summer Anthems, but he claims the cumulated $40,400 grand
prize of the night.

Hosted by Tituss Burgess, of cultural phenomenon, The Unbreakable Kimmy Schmidt,
this competition is the perfect combination of singing and strategy. The six contestants
can win up to $60,000 based on the accuracy of their singing, which is calculated by a
vocal analyzer. Each round, the singers must vote off their peers to advance
(reminiscent of Survivor or The Weakest Link)

With Cena’s extensive knowledge of reality television, he takes advantage of the voting
process to land a spot in the final round. The host and competitor have a jovial
relationship as Burgess is impressed with Cena’s willingness to use unique tactics. After
a heated sing off, he is crowned the champion and takes home $40,400.

Frankie Cena is a Vancouver/Toronto based singer, TV host, and entrepreneur.

If you would like more information about this, please call Frankie at 778-999-9480 or
email frankiecena@gmail.com.