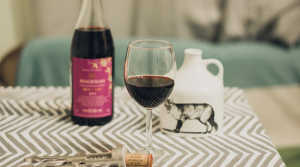 VALLEJO, CA, UNITED STATES , October 14, 2020 /EINPresswire.com/ — The Beaujolais Nouveau will be released at 12:01 a.m. on Nov. 19 in France and throughout the world. Randy Risner Vallejo, wine connoisseur, and francophone is eagerly awaiting his first taste of the cherry-red wine. Every year, under French law, the new vintage of Nouveau wines from the Beaujolais region of France is released on the third Thursday in November. In France, and at many French bistros in the United States, the release is accompanied by great fanfare and tastings continuing for five days.

"This is such an exciting time. I am so pleased that, despite all that the coronavirus is doing to change our world, this tradition will continue," says Randy Risner Vallejo. The wines actually will leave the wineries one week earlier this year than usual to allow flexibility for transportation, and shipment to the United States and other non-EU countries will occur on Oct 12, more than two weeks earlier than usual. However, the wines will not be opened and tasted until their debut date, says Randy Risner Vallejo.

"The tasty, clean wines are best enjoyed when they are young," says Randy Risner Vallejo. "I am looking forward to my first taste of this year's vintage."
The Nouveau wine was created from Gamay grapes about 100 years ago as an inexpensive way to celebrate the end of the harvest season. Originally, the first bottles of the wines were carried to Paris in a race. By the 1970s, this race became a media event, and, by the 1990s, the idea of the race had spread globally.