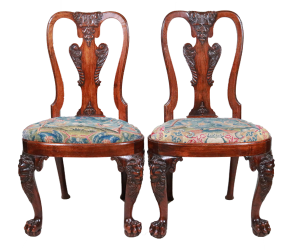 Pair of George II Anglo-Chinese Huanghuali balloon-seat side chairs, circa 1740. 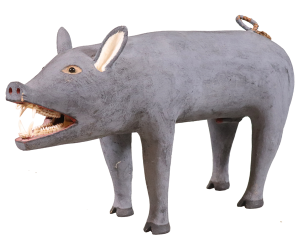 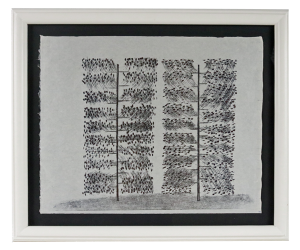 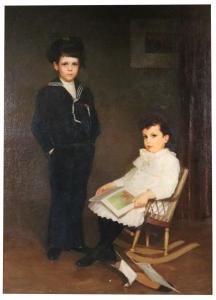 The whimsical, Internet-only auction is headlined by property from the Siegmund collection of folk art and the Steve and Stephanie Alpert collection.

The auction is packed with property from private collections — American and English furniture, folk art and self-taught/outsider art, American paintings, Chinese works of art and silver and jewelry.”
— Andrew Holter

The whimsical, online sale will offer a wide variety of fine and decorative arts. Every price point will be represented. Real time online and absentee bidding will be provided by LiveAuctioneers.com, Invaluable.com, Bidsquare.com and the Nye & Company website: www.nyeandcompany.com. Telephone bidding will also be available on a limited basis.

The auction is packed with a variety of property from private collections, with an emphasis on American and English furniture, folk art and self-taught/outsider art, American paintings, Chinese works of art and silver and jewelry.

The Steve and Stephanie Alpert collection is one of the sale’s expected headliners. Steve Alpert had an unbridled enthusiasm for all types of fine and decorative art. Both he and his wife Stephanie are known in many different collecting circles and their passion for collecting shines through in each object they collected.

Additionally, their support and patronage of contemporary artists is nothing short of amazing. This sale will feature a superb selection of self-taught art from primarily Southwestern artists such as Felipe and Leroy Archuleta, Leroy Ortega and Felix Lopez, as well as modern furniture from the artist Pedro Friedeberg.

The father and son duo of Felipe and Leroy Archuleta have created a number of wonderfully delightful and fascinatingly whimsical animals, such as a wild boar, with real boar teeth, an expressive alligator bench and a Dall sheep covered in real sheep’s wool. The large giraffe made by Leroy would be a perfect addition to any child’s nursery.

Not to be outdone, Felipe has created a fabulous woodpecker feeding its babies inside the hole of a tree branch. Additionally, there are three bottlecap snakes made by Felipe. Leroy Ortega, a Santa Fe, New Mexico artist, has also created some carved and painted animals in the same tantalizing aesthetic.

The Siegmund collection is a terrific assemblage of folk art objects that will be sure to please collectors, trade and institutions alike. For Joanne H. and Frederick Siegmund, what began as a young couple’s project to furnish their new Upper West Side apartment in the 1960s evolved into a passionate, intellectual, and cultural adventure.

Joanne and Fred – attorneys, New Yorkers and true soulmates – used their second home in Litchfield County, Connecticut as a base for exploring the earliest outdoor antique shows. They enjoyed getting to know the “interesting, friendly, and knowledgeable” dealers and expanding their social circle to include collectors around the country. Many became lifelong friends.

In Joanne’s words, “Collecting became the central focus of our memories.” In Fred’s words, “We never bought anything we didn’t like.” The Siegmunds knew they were playing an important role in salvaging American history. As Joanne said, “I feel like we are making a contribution by saving all of these things.” Joanne was invited to serve on the Acquisitions Committee and join the Board of Trustees at the American Folk Art Museum in New York.

One of the highlights of this collection is a delightful carved pine and bone sailor’s pipe. The pipe bowl is embellished with the face of a sailor wearing a hat. This is anything but a utilitarian object. It is wonderfully expressive, was skillfully executed and is the perfect 19th century vehicle for smoking tobacco. There is also a terrific carved and painted seated man by James MacCallister Edgington from Ohio. This figure wears a large brimmed hat and was once part of the Michael Friedman Collection.

Capturing the true, vivid and wildly evocative nature of self-taught and folk art is the anonymous made black preacher figure. Pictured in American Primitive, Discoveries in Folk Art Sculpture by Roger Ricco and Frank Maresca, this piece emotes the American folk tradition. Additional lots from this collection are also being offered at Christie’s, New York, In Praise of America: Important American Furniture, Folk Art, Silver, Prints and Broadsides on January 22nd.

For those who prefer traditional decorative arts, there is a superb collection of English and Irish furniture from the estate of Robert K. Johnson of Maine and South Carolina. Headlining the collection are three lots of George II Anglo-Chinese huanghuali chairs, possibly from a set supplied to Sir Henry Gough, an extremely successful merchant who traded with India and China. The lots consist of one armchair, a pair of balloon-seat side chairs and a pair of caned balloon-seat side chairs. They are the epitome of the baroque period and have scintillating curves and bold carving. The lion carved knees are truly expressive and regal in nature.

A very similar set of chairs are featured in a painting of the Gough family by William Verelst, dated 1741: private collection, exhibited Manners and Morals The Tate Gallery, London, 1987 exh. cat., pp.124-5, No. 107 and subsequently on loan to the Victoria and Albert Museum. Also in the collection are a superb and rare pair of Georgian ‘Japanned’ hanging wall cabinets from the well-known English furniture dealers, Mallet. The collection also features exceptional rugs and carpets.

Continuing with the theme of traditional decorative arts, Nye & Company is pleased to be offering some additional property from the estate of William Hodgins, the highly regarded Boston-based interior designer. Hodgins was an Architectural Digest, AD100 decorator, once described as “a beacon of American Classicism”. He learned his craft working as an assistant for the leading design firm of Sister Parish and Albert Hadley.

Hodgins later went on to establish his own Rolodex of who’s-who clients, including Annette de la Renta’s three sisters, financier Felix Rohatyn, a couple of members of the Washington Post’s Graham family, Linda and Robert Taubman and a Saudi prince. His work has been published in Architectural Digest, House and Garden, Vogue, Town and Country and the New York Times.

If traditional furniture is not your preference, fear not. There is a wonderful selection of Modern furniture, including a set of four Robert Venturi “Chippendale” chairs for Knoll. There is also a Pedro Friedeberg hand and foot chair, signed by the maker.

For those who like Piet Mondrian translated into furniture, there is an excellent pair of Cassina red and blue chairs, after Gerrit Rietveld. Wonderfully rectilinear and bold in primary colors, these chairs are architectural in design and emblematic of the Dutch de Stijl movement of the 1920s. Additionally, there is a pair of Knoll "Wassily Chairs" after Marcel Breuer and a pair of Frank Gehry cross check chairs.

For fans of fine art, there are a number of delightful works of American folk portraits and classic American art from private collections. Folk art portraiture includes works by Micah Williams, John Paradise, Deacon Robert Pecham, William Kennedy and others.

For those who prefer the more classically trained artists, works are by delightfully done by painters such as Everett Shin, John Traynor, Joseph Barrett, Henry Bertoia and Peter Moran. Of note, there are a number of Moran drawings depicting the Eastern end of Long Island around Georgica/East Hampton.

There is also an exceptional double portrait of the brothers, Sheldon and Adelbert Niles Potter, painted by William Worcester Churchill (1858-1926). Evocative of the great portraits by John Singer Sargent, Churchill was trained in Boston and Paris. This portrait is a striking work that draws viewers in and transports them to a time of opulence and grandeur in the late 19th century.

No collection sale would be complete without some sparkling and dazzling eye catchers. For those who like silver, gold and jewelry, Part II of a New Jersey private Short Hills and San Francisco collector includes multiple pieces by designer Marco Bicago, David Yurman, Roberto Coin and Tiffany. Another New Jersey private collector boasts multiple, whimsical 18 karat and costume jewelry pieces, including a Pedro Boregaard 18 karat gold egg charm lariat necklace.
This collection also includes multiple early 20th century Tiffany tablewares, including a child’s bowl and underplate, a pair of small bowls and other Tiffany bowls. There is also a stunning assembled sterling silver repousse tea service by the early 20th century Baltimore firm Jenkins and Jenkins. This exceptional service includes seven pieces and was originally a wedding gift to the Baltimore society beauty, Eleonor Laurenson Myer Simpson Young from her aunt, Elizabeth Laurenson Abell (Mrs. Edwin F. Abell, also of Baltimore).
People can bid in absentia and online. An online preview is being held through January 20-21st at www.nyeandcompany.com, www.liveauctioneers.com, www.bidsquare.com and www.invaluable.com. Anyone looking for additional images, condition reports or info about an object is invited to visit the Nye & Company website or email to info@nyeandcompany.com.

John Nye had a long and fruitful career at Sotheby’s before he and his wife, Kathleen, acquired Dawson’s in 2003 and started Dawson & Nye. With the move to Bloomfield seven years later, they renamed the business to Nye & Company (Auctioneers, Appraisers, Antiques). The firm is nationwide, but the vast bulk of the business comes from trusts and estates in the tri-state area.

For more information about Nye & Company Auctioneers and the Estate Treasures online only auction on Wednesday and Thursday, January 20th and 21st, visit www.nyeandcompany.com. The full color catalog can be viewed in its entirety right now, at www.nyeandcompany.com, www.liveauctioneers.com, www.bidsquare.com and www.invaluable.com.