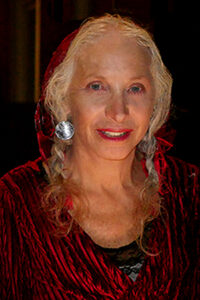 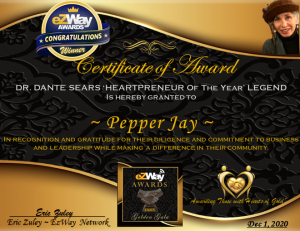 Pepper Jay Heartpreneur of the Year Be the Smile on Your Face album

Pepper Jay was awarded in recognition and gratitude for her diligence and commitment to sharing with children and leadership while making a difference in her community.”
— eZWay Awards

MISSION VIEJO, CA, US, January 7, 2021 /EINPresswire.com/ — The Virtual Golden Gala Awards 2020 Honored Music Producer and Teacher Pepper Jay with the Heartpreneur Of The Year Legend Award. According to eZWay Awards, "Pepper Jay was awarded in recognition and gratitude for her diligence and commitment to the business of sharing with children and leadership while making a difference in her community." The "eZWay Virtual Wall Of Fame Awards" honors the most extraordinary philanthropists & explosive life-changers with "hearts of gold." It aired on New Year's Eve and Day and was the most star-studded event to launch the new decade. This Virtual Golden Gala was a celebration of giving back & uniting the light.

Pepper Jay has been busy during Covid 2020. She is building a house on her ranch in Pahrump, Nevada, for foster children. She recorded the Be the Smile on Your Face in Nashville at Larry Beaird Studios for Cappy Records. And, recently, that album Pepper Jay produced for John Michael Ferrari, Be the Smile on Your Face, was named Outstanding Triple A Album of the Year by the Producers Choice Awards and several tracks on that album have been getting radio play and hitting radio charts. Post Covid, author Pepper Jay hopes to continue with speaking engagements on communication skills, utilizing her textbook, "Dynamic Song Performance, the Singers Bible".

The executive producer of the eZWay Wall of Fame Golden Gala was Eric Zuley and the event producer was Tony Boldi.