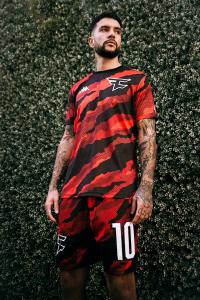 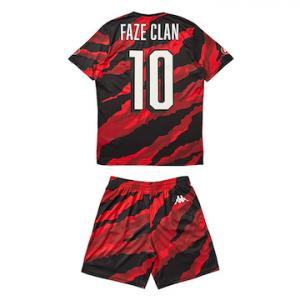 LOS ANGELES (February 22, 2021) – FaZe Clan unites a second time with iconic sportswear brand Kappa, this time alongside football (soccer) and social media juggernaut 433 to bring to life the FaZe Clan FGS 21 Kit. The FaZe Clan FGS 21 Kit is an “IRL” replica of the digital in-game kit FaZe Clan and EA released in December as a part of the FGS esports team vanity collection. The digital in-game kit garnered a lot of hype from gaming and football fans around the world and tomorrow’s drop marks the first time FaZe Clan will release a physical product parallel to a virtual release.

The limited quantity kit includes a football jersey and shorts both covered in FaZe Clan's classic red and black tiger camo print and feature the iconic Kappa logo, plus a 4 on the right sleeve representing 433. Fans will have the option to purchase the shorts ($65) and Jersey ($75) separately or together as a set ($120) tomorrow at 12pm PT at fazeclan.com.

FaZe Clan is no stranger to the international football scene. This collaboration builds the organization’s presence in the community alongside a momentous partnership with Manchester City F.C. In January, FaZe Clan and Manchester City hosted the “FaZe City Cup Ft. Fortnite” which saw over 295k registrations, making it the most registered event in Epic Games’ Global Football Campaign. Known for innovative collaborations, FaZe Clan paired with Kappa for the first time in 2019 with a 13-piece merchandise collection and a pop-up store in Los Angeles.

“Our collaboration with Kappa and 433 expresses the natural cultural convergence of the gaming and football communities,” says FaZe Clan CEO Lee Trink. “Bringing a virtual kit to life physically is a first for us, and gives us a new lane for fans to interact with and rep FaZe in multiple ways.”

“As the official kit supplier to several clubs featured in the game, we are thrilled to partner with FaZe Clan for another exciting collaboration,” says Lorenzo Boglione, Vice President of Sales for BasicNET. “FIFA 21 is one of the best sports titles ever created. As the global transcendence of esports continues, this partnership represents our commitment to authentically bridge the gap between sports, fashion, and gaming.”

About FaZe Clan:
Since its inception in 2010, FaZe Clan has established itself as the world’s most prominent and influential gaming organization known for its disruptive original content and hyper-engaged global fanbase of 230 million combined across all social platforms. FaZe Clan holds an unrivalled position at the epicenter of gaming, sports, culture and entertainment, driving how the next generation consumes content, plays and shops. Their roster of 85 influential personalities consists of world-class gamers, engaging content creators and a mix of talent beyond the world of gaming, including NBA star Ben Simmons, Lebron “Bronny” James Jr and Lil Yachty. The organization’s unmatched esports division includes seven competitive teams in Fortnite, FIFA, PUBG, PUBG Mobile, Rainbow Six, Call of Duty League (Atlanta FaZe) and CS:GO with dozens of world championship trophies among them. In addition, FaZe Clan has become a sought-after fashion and lifestyle brand through an inspired apparel line and limited-edition collaborations with partners including Champion, NFL, Manchester City FC, Lyrical Lemonade, Kappa, CLOT, LA Kings, and more. Follow us @FaZeClan, @FaZeApparel and @FaZeUpdate.

ABOUT KAPPA®
Born in Turin, Italy in 1967, Kappa® is a leading Italian sportswear brand owned and operated by BasicNet SpA, a global manufacturer of apparel, footwear and accessories for sport and leisure. Present in more than 130 countries and worn by professional athletes and style enthusiasts around the world, Kappa® is recognized for its heritage of technical sportswear, and non-conformist blend of Italian technology and style.Operating through a global network of licensed partners, BasicNet provides R&D, product industrialization, and global marketing services for a diverse portfolio of brands including Kappa® (Kappa Authentic®, Kappa Sport®, KOMBAT™, and Kontroll®), Robe di Kappa®, KWay®, Superga®, Briko®, Jesus®Jeans, Sabelt® and Sebago@. Based in Turin, BasicNet has been listed on the Italian Stock Exchange since 1999. Kappa.com | @kappa

About 433
433 is the biggest online football community in the world. With over 50 million followers on all its accounts, 433 brings locker room fun to your life. From superstar take-overs to hilarious clips, 433 is the definition of fun and football. Next to the main account, 433 reaches more fans across the world through sub-channels like Visubal and 433esports. With its own production team, 433 Studios, the company produces up to 100 pieces of content per day, ranging from short documentaries to stunning graphics.