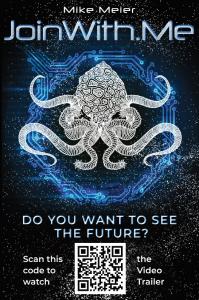 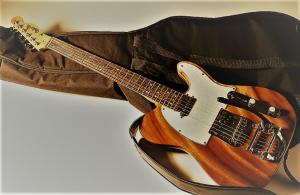 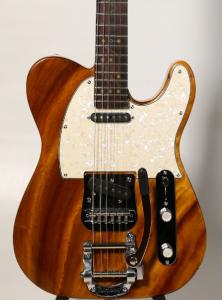 Built by Trevor Woodland, the Telecaster-style guitar incorporates the design features of Mike Meier’s book JoinWith.Me, including the symbolic “Creature.”

There were quite a few variables to work out but I think it all came together quite well. For example, the pick-ups are the ‘hot’ Fralin Blues pickups, which sound best with 500k pods…”
— Trevor Woodland, luthier, Vigilant Guitars

The recently published sci-fi book JoinWith.Me by Mike Meier is based on an award-winning screenplay of the same name. In brief, the storyline is: In the year 2032, Sam Vanderpool lives a lonely existence with a menial job in an urban dystopia that is impersonal and dominated by technology. Sam is jolted from his routine when an ad appears on his computer screen that takes him to a website called JoinWith.Me. The site offers counseling for the lonely, and Sam decides to log on…

It turns out the author Mike Meier is also an avid guitar player. So Trevor Woodland designed and built a guitar that reflects the book’s design. The most distinctive feature is the “glow-in-the-dark” epoxy for the fret markers. Trevor explains how he created this totally unique design: “I made the fretmarkers with CNC (computer numerical controlled) machinery that cut the design into the fretboard, and then filled it with epoxy resin that contains ‘glow-in-the-dark’ pigments.” Trevor adds that, “To charge the epoxy, natural light works but a small UV pen also charges it quite fast.”

The guitar includes the symbol of the story’s antagonist, the “Creature” from the cover of the book, on the 12th fret. The Creature also appears on the custom-made neck plate on the back.

How did the guitar turn out? Notes Trevor, “There were quite a few variables to work out but I think it all came together quite well. For example, the pick-ups are the ‘hot’ Fralin Blues pickups, which sound best with 500k pods. Thus, I had to rebuild the control plate so that the pick-ups sound their best.”

Mike Meier concludes that their cooperation has produced a truly outstanding guitar. “Trevor’s hands-on experience has turned the guitar into an heirloom. I have never seen a more beautiful and more functional Telecaster guitar.”

Trevor Woodland completed intensive workshops with the Summit School of Guitar Building and worked under Steve Mason and Mathew Dolmage; two Vancouver Island based guitar technicians and performers. When he established Vigilant Guitars in 2015, his passions and profession finally merged. He now builds guitars full-time under the name Vigilant Guitars in Victoria, BC. Website: https://www.vigilantguitars.com/

About Mike Meier, Author of JoinWith.Me

Mike Meier grew up in Germany. He holds a master’s degree in political science as well as a J.D. and LL.M. When not writing books and screenplays, he enjoys playing Latin and Flamenco guitar. He currently resides in the greater Washington, D.C area. Website: https://JoinWith.Me