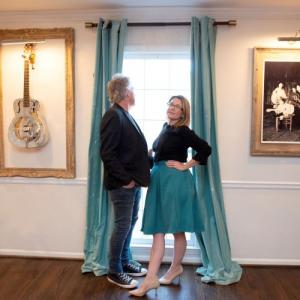 The Ormewoods in their home in Roswell, GA. 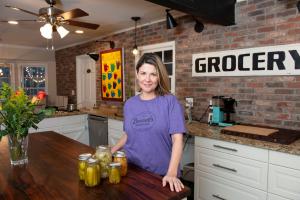 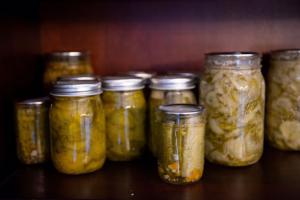 The remaining homegrown pickles that started the challenge

Folk rock duo turns their creative energies to growing food for a family of four during pandemic and is documenting it on YouTube.

I was not very optimistic about this project. But we kept going because we literally had nowhere to go and nothing to do during quarantine and it was fun to be creating together.”
— Don McCollister

ROSWELL, GA, USA, March 4, 2021 /EINPresswire.com/ — Folk rock duo The Ormewoods, Don McCollister and Claire Pearson, kicked off the 2020 music festival season last March by headlining a show in Piedmont Park in downtown Atlanta. Little did they know when they left the stage, that their first gig of the year would also be their last for more than a year. And they definitely could not have predicted that in one year's time, they would be documenting on YouTube their attempt to grow food for a family of 4.

Claire owns two market delis in downtown Atlanta and began to experience first hand food shortages and supply chain issues. "There were a few months in the beginning of the pandemic where it was really scary. My business partner and I were able to order toilet paper when no one else could get it so we started sending a free roll with every delivery order" says Pearson. "It made Don and me think about the possibility of food shortages both personally and for the store which led to the idea of growing our own."

The Ormewoods had recently moved to the Atlanta suburbs and were sitting on almost an acre of land – a huge difference from their former city lot in Southeast Atlanta where they had grown vegetables for fun in a small bed and containers. Don, a two time Grammy winning audio engineer and music producer, also happens to be a woodworker, and he got to work building raised beds and designing an irrigation system.

"Until I met Claire, I killed anything and everything I ever tried to grow. I was hopeful Claire could carry us but soon after we got two beds full of tomatoes, she confused our homemade sanitizer bottle for our organic fertilizer and sprayed bleach on every plant killing everything. We call it the bleach massacre. So it's safe to say, I was not very optimistic about this project. But we kept going because we literally had nowhere to go and nothing to do during quarantine," says McCollister. "And it was fun."

Despite the slow start, they got a bumper crop of cucumbers and started making pickles. "We had to learn how to can because we could not possibly eat all those cucumbers. We decided that we probably had enough to last us a year – which we did. We are still eating last summer's pickles," says Pearson.

The couple originally thought they would eat what they grew as they harvested it but their little garden outperformed their wildest expectations. Not wanting the food to go to waste, they challenged themselves to preserve it with the hope that they might be able to have fresh veggies for a whole year. Their stock is running low but in addition to pickles they still have some homemade tomato sauce, oregano, rosemary oil, jalapenos and pickled beets just in time to be replaced by this year's growing season crops. With these successes also came failures. All of their cantaloupe were eaten by pests, the corn never got full size, carrots were woody and blueberries were all eaten by birds.

The pair was learning a lot watching YouTube videos. When 2021 came around, and gigs were still not looking possible, they decided that documenting their journey to grow food for a year, the second time, was a way to stay connected to their fan base and work together creatively. They also realized that there aren't a lot of people on YouTube like them doing this and maybe there was a need for this content.

"We have so many favorite channels but none of them are really like us. The people we watch are farmers, homesteaders and home schoolers with big families. A lot of them have grown up living on the land or had the dream to. That's not our story. We grew up in the suburbs, me in Dunwoody and Claire outside of Jacksonville, FL, with zero gardening experience. In fact, when we moved up here, Claire did NOT want a yard because of the upkeep," says McCollister. "So for us to show our learning journey, our successes and failures in an urban setting starting from scratch, might really inspire other people like us who want to do this on a smaller scale than what you currently see but don't know how. "

The pair is posting a garden tour every Sunday and a behind the scenes video every Thursday on their YouTube channel – The Ormewoods. Subscribe to keep up with them and follow along. Also, you can find them on their favorite social media platform Instagram @ormewoods.