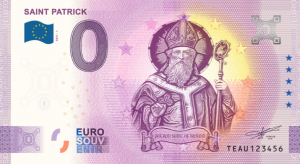 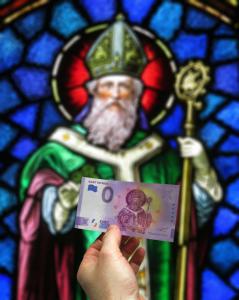 St. Patrick note and the original image used to create the design

After the events of the past year, we feel like the world could use a little more Irish luck”
— Peter Schneider

“After the events of the past year, we feel like the world could use a little more Irish luck,” said Peter Schneider, Founder of Euro Note Souvenir. “St. Patrick is known as the patron saint of good fortune, so we think having a bill with his likeness tucked away somewhere safe certainly wouldn’t do any harm.”

Each note will feature an image of St. Patrick on the front of the bill. In the depiction, St. Patrick is shown holding up his staff in one hand and a shamrock in the other, raised in a gesture of blessing. His portrait is enshrined in a halo of stars with the honorific “Patron Saint of Ireland” written below his likeness.

These zero Euro notes will be printed in the same facility that presses Euro banknotes for the E.U. at the behest of Euro Note Souvenir. Euro Note Souvenir is the exclusive license-holder of zero Euro notes in Ireland, which gives the company the ability to create customized commemorative Euro notes with the look and feel of real Euro currency. The company has previously honored other iconic Irish mainstays, including the city of Dublin, revolutionary Irish politician Michael Collins, the Cliffs of Moher and even John Wayne’s portrayal of “The Quiet Man.”

“Our selection process for our notes is two-fold,” says Schneider. “First, it has to be something or someone that we feel is truly worthy of being commemorated on a note. Second, it needs to be a figure that captures the imagination of the public. As a proud Irishman, St. Patrick seemed to me like an obvious choice on both counts.”

Since St. Patrick has been Ireland’s patron saint for more than a thousand years, the actual events of his life are difficult to separate from the legends that have popped up around them. There are two writings that are alleged to have been scribed by Patrick, including an autobiography that tells of his conversion to Christianity during his time as a slave after being captured by Irish pirates. He wound up freeing himself from captivity and returning to Ireland as a missionary later in life, and is widely credited for popularizing Catholicism in the country.

The legend of St. Patrick “driving the snakes from Ireland” appears to have been popularized by Jocelyn of Furness, who writes in a retelling of the life of St. Patrick that Ireland’s patron saint banished all snakes into the sea after they attacked him during a 40-day fast. While the tale is certainly mythical in nature, it persists to this day, to the point that archaeologists have actually gone hunting through Irish fossil records for evidence of snakes ever existing on the island (so far, they’ve come up empty-handed).

The St. Patrick zero Euro note is sure to catch the eyes of both St. Patrick’s Day revelers and religious memorabilia collectors around the world. While there are seemingly endless shamrocks, Irish decor, green clothing items and other souvenirs for St. Patrick’s Day, surprisingly few of them have anything to do with St. Patrick himself. Similarly, despite there being many holy motifs and famous religious figures honored on commemorative Euros around the world, this is the first time that Ireland’s patron saint has been memorialized on a zero Euro note.

“There are commemorative notes for The Vatican, Santo Antonio, and various famous churches and cathedrals around the globe, but not one for Ireland’s most famous patron saint,” said Schneider. “This is a chance to be one of just five thousand people around the world to say they have a St. Patrick note.”

Because of the upcoming holiday, and the uniqueness of the note, the company anticipates that the first run of 5,000 will sell out quickly.

What are Irish 0 Euro Banknotes?