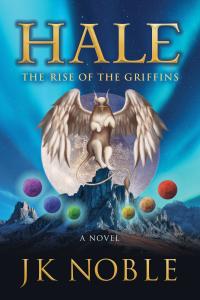 Hale: The Rise of the Griffins Cover

Never take off your amulet. It is the only thing protecting you now.”
— J.K. Noble

NEW YORK, NY, UNITED STATES, May 13, 2021 /EINPresswire.com/ — Morgan James’ new release, Hale: The Rise of the Griffins, by J.K. Noble, is a fictional novel that tells the story of Hale, a teenage boy thrust into a dangerous world of magic, destiny, and magnificent creatures. Told by a series of short stories, Hale takes fantasy lovers on entertaining adventures in every chapter.
When sixteen-year-old Hale attempts to escape from his kidnaper, he suddenly finds himself in the magical world his sister had always tried to protect him from: the Land of Griffins. Hale discovers he is a griffin, and bonds with the Griffin Leader, Bayo. However, as the two grow closer, Hale is unaware of the dark plans Bayo has in store for him and must embark on a journey to discover who he is and the truth behind his family’s tragic deaths.

An anti-chosen-one story that showcases redemption after grave mistakes, Hale shows what immense power could do in the right and wrong hands. Hale not only displays the strength to overcome fear but teaches young readers to be comfortable with who they are, all while taking them on a journey through a wondrous world of magic.

If you would like more information about this topic, or to schedule an interview with J.K. Noble, please contact JK Noble Inc. at support@jknoble.com

About the Author:
J.K. Noble grew up and resides in the Big Apple, where fantastical inspiration lives among the bright lights and colorful people. She envisions unique mythological creatures majestically roaming bustling streets and skimming the skies between skyscrapers. Absorbing fantasy stories in awe of the great magic each possesses, Noble soon learned that she too holds the same power as the mystic writers of old. Finally, Noble awakens in her debut novel, Hale: The Rise of the Griffins, but her imagination does not end there!

Book Trailer NEW YA Fantasy Novel | Hale: The Rise of the Griffins by Author/Artist JK Noble | 2021