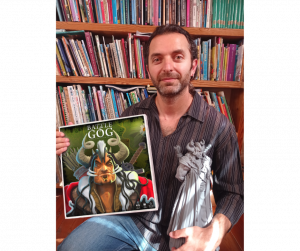 Founded by father of six Vitali Minin, Battle of Gog is shifting the narrative of traditional board game dynamics by emphasizing family interactions and strategic decision-making. The theme of the game was inspired by the Old Testament in the Bible from chapter 38 of The Book Of Ezekiel, but instead of using the well known Gog and Magog apocalyptic narrative, Vitali takes it to a totally fictional narrative as players aim tirelessly at winning the battle for the ancient land of Canaan. From conquering cities, to fighting enemy soldiers, obtaining the scrolls, or reaching all four corners of the map to make a winning move across the land of Canaan; Battle of Gog keeps players engaged, adrenaline high, and families connected for a well-rounded experience.

Featuring multiple conclusion scenarios to ensure that every game is diverse and different depending on the player’s decisions, Battle of Gog cultivates an energetic and exciting experience as families eagerly take turns to determine how the battle for Canaan will end. While most board games come with many pieces, long setup, and long playtime, Battle Of Gog uses the box itself as the game board, uses few parts, and its dynamic model keeps even the youngest players engaged from start to finish.

Through proof of concept, dedication to innovation, and unwavering commitment to connecting families across the world; Vitali Minin’s purpose-driven vision has come to fruition. Battle of Gog has just recently started a Kickstarter campaign, requesting a reasonable $39 contribution to help get this project off the ground and into the nearest toy store or online retailer.

To learn more about Battle Of Gog, or contribute to the Kickstarter campaign, please visit https://www.kickstarter.com/projects/vitaliminin/battle-of-gog

Crazzybox Inc was developed by Vitali Minin; designer, illustrator, and inventor. Vitali has always been in the market of developing new and exciting toys and games for children and families around the world. Former founder and CEO at Modular Toys Ltd, Vitali Minin is dedicated to developing educational construction toys; one of which ended up being shrunk down and placed into a Kinder Egg for Italian chocolate giant, Ferrero. The goal with his new board game Battle of GOG is to create a simple, inexpensive, challenging light strategy board game for the whole family, where every game is different; but to win all players need to think and make wise choices.